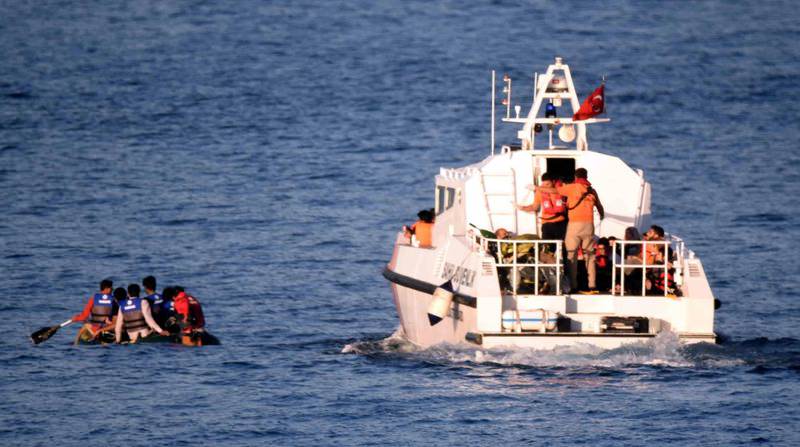 by Ahmet Topal Sep 21, 2015 12:00 am
Turkish Coast Guard personnel, who have been working around the clock since the beginning of the Syrian crisis in 2011, have saved more than 54,000 lives so far this year. There are some 5,000 people working for the Coast Guard Command who are forced to deal with the growing refugee crisis and increasingly desperate people who are trying to find illicit ways to reach Europe.

According to figures released by the command, 14,961 people were saved in search and rescue operations in the seas off the Turkish coast in 574 separate instances in 2014 while in the first nine months of this year, the figure rose to 54,706 – 49,000 were saved in the Aegean Sea. Last year, 69 people drowned in accidents while the figure for the first nine months of this year was 156 dead and 123 missing.

The Coast Guard was also involved in operations launched against 106 human smuggling gangs last year and 103 this year.

Turkey has mobilized significant resources to save lives, with 58 ships, nine helicopters, two planes and three mobile radar vehicles involved in the operations. The Safe-MED operation initiated by authorities has dramatically decreased the number of smuggling attempts and deaths off the Mediterranean coast, with traffickers shifting their focus to the Aegean Sea. Officials note that the "ghost ship" problem of last year in the eastern Mediterranean Sea had ended as a result of Safe-Med.

The Coast Guard hotline is operational 24 hours a day for refugees stranded at sea, with those facing danger allowed to send their coordinates in the sea via WhatsApp. Officials said some refugees even donned inflated inner tire tubes to cross the sea. Experts said the sea temperature was a crucial factor in saving lives, with people surviving for up to 40 hours during the summer in open sea while warning that deaths could dramatically increase in the winter months.
Last Update: Sep 21, 2015 2:32 am
RELATED TOPICS