Syrians in Edirne being sent to other provinces around Turkey 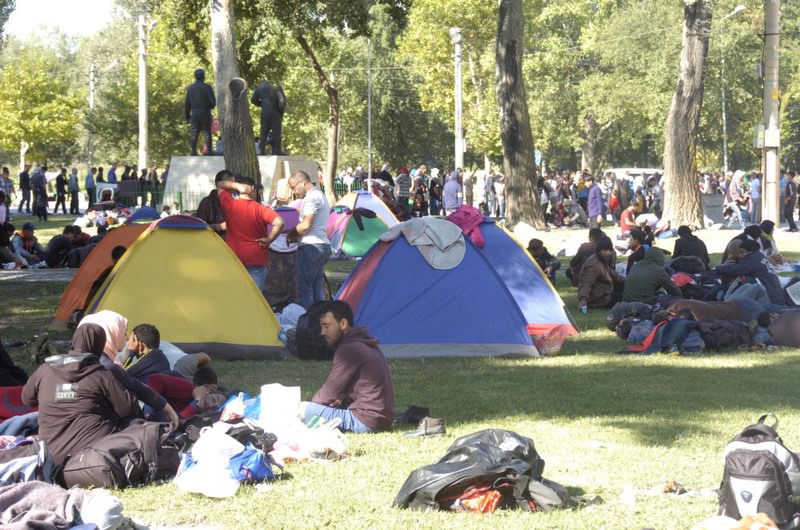 Refugees camped near the highways in Edirne were transferred to the Ku0131rpu0131nar Er Meydanu0131, the stadium where the Ku0131rkpu0131nar Oil Wrestling Championship takes place.
by Daily Sabah with AA Sep 22, 2015 12:00 am

PM Davutoğlu's meeting with the delegation of refugees proved to be fruitful, and refugees waiting at the Grand Bus Station in Istanbul have dispersed. Those camping in Edirne will be transferred to other province of their choosing

Following Prime Minister Ahmet Davutoğlu's meeting over the weekend with the Syrian delegation of refugees in Ankara, hundreds of migrants who had been waiting in the northwestern city of Edirne to reach the nearby Greek border as well as the ones who had been camping at the Grand Bus Station of Istanbul agreed to abandon their protest and return to the cities or camps that were previously their home. After the negotiations with the officials from the Ministry of Interior Directorate General of Migration Management, a group of migrants decided to leave the bus station.

Those who have a place to stay in Istanbul left the bus station, while migrants who came from camps and other parts of Turkey, mainly from Adana, Şanlıurfa and Gaziantep, waited for the buses to take them back. However, a small group of refugees refused to go back and continued their wait in the Grand Bus Station in Istanbul until the first light of day. The group of 300 migrants, including women, children and handicapped people who are in wheel chairs, announced that they will walk to Edirne and began marching through the TEM Highway. Five kilometers after the Mahmutbey counters, the migrants stopped and rested for a while. The refugees are continuing their march under the watch of the security forces.

While a small group is marching to Edirne from Istanbul, the refugees who camped near the highways of the city were taken to the stadium, where Kırkpınar Oil Wrestling tournaments take place, in order to spend the night. However, the refugees will be transferred to other provinces until the end of Qurban Bayram, said Edirne Governor Ali Şahin, following his meeting with Migration Management Director Atilla Toros, Edirne Municipality Mayor Recep Gürkan and a delegation of refugees. He said Edirne has been hosting nearly 3,000 Syrian refugees for almost 10 days. Highlighting that most of the refugees were sent back to the provinces from where they came, Şahin said: "We do not have an official number but we are currently hosting about 1,500 refugees in Edirne. At first they blocked the highway for 30 hours, but we convinced them to come with us to the stadium. The living conditions are good during the day, however, the nights are very cold."

To convince the migrants camped near the highway, the authorities broadcasted a video of Davutoğlu and the representatives' meeting. After the negotiations with the officials from the Interior Ministry's Directorate General of Migration Management, refugees agreed to be transferred to the stadium; however, they are not abandoning their thoughts of going to Greece. "We are aware that they are not happy with the current situation, but they say they will go to Greece no matter what. Their primary goal is to arrive in Edirne and then cross the Greek border," Şahin said.

He reminded everyone about the international agreements that have been ratified, and said the government cannot possibly send refugees to European countries without their consent. Şahin added that the governorate and the delegation of refugees agreed to the transfer of refugees to other provinces. "We will take their records, including their identification details and where they are from, as well as where they have been living. On Tuesday, we will send them to the places that they want to go, not to refugee camps," Şahin added. On the other hand, Toros said the identification information of the refugees who completed their registration will be given to the U.N. and they will be the first to be notified once European countries decided to allow migrants to enter their borders.
RELATED TOPICS