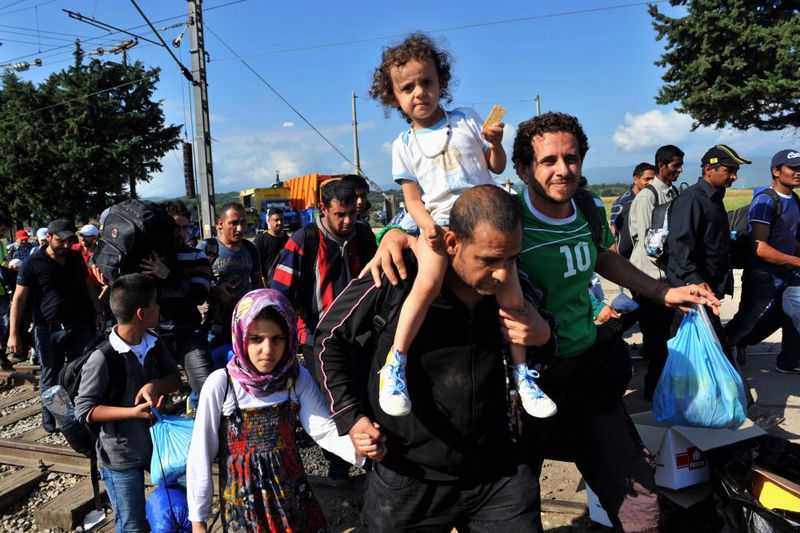 Speaking on a TV program, PM Davutoğlu drew a road map to stop the refugee crisis. He also said his speech at the United Nations General Assembly will focus on the refugee problem and Turkey's stance on the matter

Turkish Prime Minister Ahmet Davutoğlu was the guest of a TV show on Monday where he commented on the current conditions of Syrians in Turkey, and said the refugee crisis will be the main topic at the upcoming United Nations General Assembly (UNGA).

Davutoğlu stressed Turkey is the country that shelters the most refugees around the world. He also said he recently informed the ministers of other countries about the current refugee crisis and Turkey's stance. Emphasizing that the people of Turkey embraced a very noble attitude toward the refugees, Davutoğlu said: "Our people have acted in a very noble and honorable way. There has been no bias against Syrians, Arabs or any racist comments. We have been welcoming everyone with open arms."

He said Turkey has been underscoring the severity of the refugee problem for the last four years, but the rest of the world failed to realize it sooner. "We always told the world that we should solve this Syrian crisis. If we are not able to solve it, we should establish a safe zone within the borders of Syria to be able to stop the refugees flocking to other countries. If we cannot do anything, let's shelter the refugees together. They chose silence and think that people die in the Middle East all the time, it does not matter whether they are Syrians or not. This is all psychology; if something happened in Europe, it would be considered as a great loss," Davutoğlu said.

He added that Europe put all the responsibility onto the shoulders of Turkey, as the country does not run away from taking care of the people coming from Syria. "Europe failed to see that the crisis was about to grow bigger and bigger like a snowball. They could only see the bigger picture with the photos of children whose bodies washed ashore in the Aegean and Mediterranean as well as the refugees camping outside Edirne. Hence, Europe has become nervous," Davutoğlu continued. He stressed that many European leaders, including German Chancellor Angela Merkel, called him following Turkey's condemnation of the mistreatment of refugees on European soil. Underscoring that he continues to stay in contact with European and world leaders on this issue, Davutoğlu said: "The meetings continue with the same speed and determination. I have talked to the secretary general of the Council of Europe [Thorbjørn Jagland]. A plan has been initiated to find a solution to the crisis and it is currently continuing in a positive way."

Davutoğlu highlighted three major problems that should be solved as soon as possible to put an end to the Syrian crisis. First, the flood of refugees should be prevented. And for that to happen, the crisis in Syria should be solved or a safe zone should be established within Syrian borders. "Second, we have to give more thought to how we are going to manage the refugees together. This cannot continue with Turkey's lone stance anymore. Finally, we have to formulate a plan on how to send these Syrians back to their counties once the civil war is over. Moreover, it is not certain that Germany will allow 1 million refugees to enter. It is easier said than done," Davutoğlu said.

He stressed during the interview that Turkey is facing a bigger refugee problem every day. "I came together with the delegation of refugees in Edirne. As I told them, I believe they are part of a rightful protest. They all want to make their voices heard by the rest of the world. They all expressed their gratitude to Turkey," he added.

Davutoğlu said Syrians are aware of the fact that people in Turkey are doing everything they can, and continued: "Their reaction is not directed at us but to Europe. They are trying to make their voice heard. However, I told them that no European country is accepting refugees right now, so there was no point waiting in Edirne or the Grand Bus Station in Istanbul. I told them I will write to the European leaders about the refugees' situation and send them if the leaders accept them."

Davutoğlu also said his speech at the upcoming UNGA meeting will focus on the refugee crisis, as Turkey managed to get this crisis onto the meeting agenda. "We will hold an international summit in Turkey titled 'Migration and Migrants'. There will be a special session on Syrian refugees," Davutoğlu said. He added that the governors of Edirne and Istanbul should address all the needs of the refugees in order to prevent Turkey from gaining a negative image. He also shared a memory with a Syrian refugee. "One of them told me that he wanted to kiss the hands and the feet of the police officers, as they have treated them very nicely. Everyone suffers in places where cruelty, dictatorship, terror and violence reign. We will do everything we can for refugees."
RELATED TOPICS