More spending for Turkish families as kids head back to school 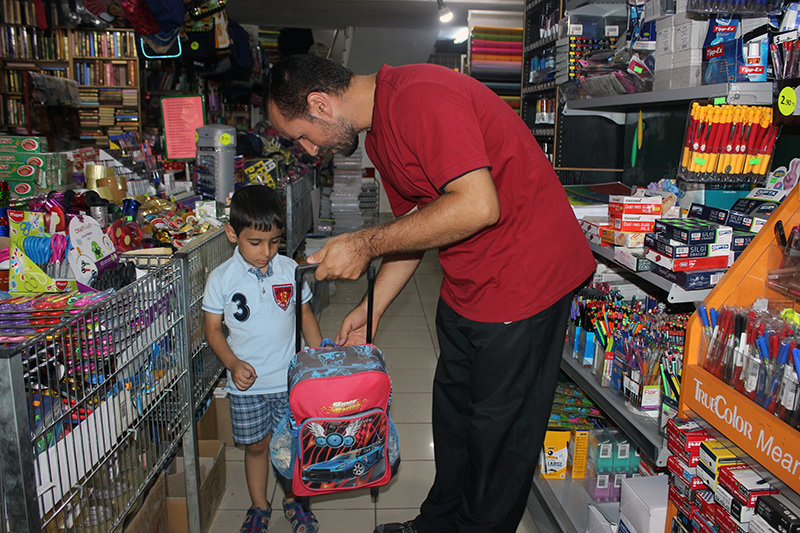 "I don't know dear. Maybe we should buy a bigger one," Perihan, a 32-year-old housewife, needs to take into account the potentially harsh winter coming up, requiring her to wear extra layers under her uniform-a requirement in Turkish public schools.

Meanwhile, Sibel's father, Ali, the-35-year-old owner of a furniture shop, was trying to guess total expenses on school uniforms by peeking at the price list.

Close to 18 million Turkish students will head to school Monday for the start of the new term.

For more than 1 million six-year-olds, it represents their first encounter with school, an institution they will have to get used to for 12 years, the length of compulsory education -- encompassing primary and secondary school -- in Turkey.

The first four years constitute elementary school while the rest represents the equivalent of secondary school.

While primary and secondary education is free of charge in Turkish public schools, the start of the new term sometimes represents a substantial loosening of the purse strings for Turkish families.

The Karabacak family has to purchase a new uniform, stationery including pens, pencils and notebooks and make the necessary arrangements for a school bus since Sibel's school is far away from her family's house.

"This is one of very few moments that I am happy to spend money. I believe Sibel needs these supplies in order to be successful in school," Ali says.

And it all adds up quickly.

For two T-shirts and a skirt, Ali paid 115 Turkish liras ($38). Then off to the nearest stationery shop to buy pens, pencils, crayons and notebooks: Another 133 Turkish liras ($44).

Ali did not have the heart to refuse to purchase a school bag adorned with a famous cartoon character from the Disney motion picture Frozen which Sibel adores, 100 Turkish liras ($33).

Naturally, total spending for a student changes according to the grade, the school and the family budget.

A survey shows that a Turkish family must spend at least 485 Turkish liras ($160) to send a child to kindergarten, according to Eğitim-Bir-Sen, a prominent teacher's union in Turkey.

The union's research center, EBSAM, said on Sep. 20 that families were to spend 12 percent more on education this year, compared to the prevıous term.

Ferhat Öztürk, a school principal in Istanbul's Merter neighborhood and a senior figure of the aforementioned union, said a family had to spend at least 780 Turkish liras ($260) for a high school student.

"Most of the money is spent on a school uniform and notebooks," Öztürk said.

According to EBSAM, a parent has to spend on average 16,700 Turkish liras ($5,520) for a child during her kindergarten and elementary school years.

Ali considers himself lucky to be able to meet his daughter's needs relatively painlessly.

For other families, back-to-school expenses can result in quite the balancing act of the budget.

Yeşim Doğaner, a 30-year-old mother of two children, for example, says she has to visit numerous stationery retailers, shopping malls, super- and discount markets to find "the most economical ones" in Istanbul's Bağcılar district, where she lives.

Doğaner, whose husband works for a bookstore in Istanbul, has her two boys, four and five years old, attending kindergarten this year. That means twice the number of pens, pencils, textbooks, and notebooks.

In Turkey, children from four to six years old can be enrolled in kindergarten but it is not compulsory.

Arzu Girişken, 38, mother of two boys and a girl, knows similar difficulties at the start of the school year.

"School expenditure is too much. My daughter, 9, wants new shoes. We postponed buying them," says Girişken.

She could not enroll their five-year-old boy in kindergarten as she feared that she could not meet expenses.

In a bid to ease the burden on family budgets, the ruling Justice and Development (AK) Party, took steps in 2004 and began distributing required textbooks for free in public schools; the government added private institutions into that scheme in 2014.

Öztürk said that this measure has provided 250 Turkish liras ($83) to a family's budget. He believes, however, the government can do more such as distributing notebooks.

"As a next step, the state can disburse some money to low-income families," Öztürk advocated.

Latif Selvi, the chairman of Eğitim-Bir-Sen, has called on the state to distribute an extra 159 Turkish liras ($53) to low-income families and public workers.

Despite efforts to lower school expenses, some families are keen on spending more in order to provide a better training for their children.

The Istanbul-based Education and Science Workers' Union released a report on Sep. 18, which said high-income families spent 70 percent more on education for their children compared to lower-income households.

"They have great expectations for their kids. That's why they buy supplementary books or enroll their children in a school far away from home " Öztürk, the school principal, said.

More often than not, this necessitates resorting to a school bus, which naturally increases school spending (and can present quite an ordeal in Istanbul, infamous for its traffic jams).

"School bus means lots of money for families," Öztürk stressed, calling on families to register their kids to the nearest school.

A child is enrolled in a school according to the home address. But some families change their home address in order to enroll their children in what they perceive as a better school.

"This practice depends on perception. But this is a futile attempt especially for elementary and secondary schools," he said.

Ali and Perihan did not seem very concerned by the distance between their home and Sibel's school.

Determined to provide the best education Sibel can receive throughout her school years, the Karabacak family are ready to spend money to that end.

That is why Ali and Perihan were more than willing to provide all the necessary supplies for their "beloved" Sibel.

And Sibel is delighted because she has "a cool new school bag".