by daily sabah Sep 27, 2015 12:00 am
A 9-year-old girl was killed and five civilians were injured when PKK rockets hit an apartment building in the Bismil district of the southeastern province of Diyarbakır on Sunday. The attack was apparently meant for a police vehicle in the Bismil district, but the militants failed to target the police car and the rockets hit a three-story apartment building. A child, Elif Şimşek, was killed at the scene and the five injured civilians were transferred to nearby hospitals. 20 year-old Agit Yıldız, who was injured in the same neşghborhood, a died of wounds in a hospital in adjacent Diyarbakır province on Monday. An investigation was launched into the incident. 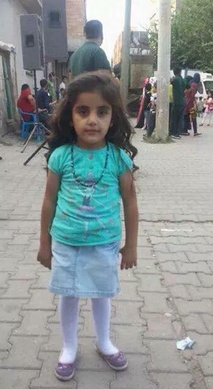 The PKK has a lengthy record of killing children since it broke the cease-fire with the Turkish state on July 11 and re-started clashes with security forces.

Previously on Sept. 13, Tahsin Uray, 9, died at Dicle University Medical Faculty Research Hospital in Diyarbakır from his injuries sustained in an explosion from a device left behind by the PKK in Turkey's southeastern province of Mardin. Uray was one of two children who found an explosive that was left by PKK terrorists on their house's roof. It exploded when both Tahsin and Ramazan Uray were holding it, security sources said.

On Aug. 30, PKK terrorists remotely detonated explosives on a road used for delivering construction equipment to the Silvan Dam construction site and killed one teen and critically injured another on Sunday in the Silvan district of Diyarbakır.

The victim, Fırat Simpil, 13, was hit by the explosion. The device is believed to have been placed by the road to target a military vehicle.
The PKK is also known to kidnap children to recruit them into the organization.

The families teenagers recruited by the PKK terrorist organization had previously staged demonstrations and called on the group to let their children return. Last year, a group of Kurdish families staged a month-long sit-in in Diyarbakır, a southeastern province with a large Kurdish population, and a brief hunger strike to protest the recruitment of their children, as young as 15, by the terrorist organization. Turkey has been long plagued by the PKK's bloody campaign of terror for Kurdish self-rule in the southeast, which killed tens of thousands over three decades.

According to government figures, the PKK has killed around 30 civilians since July and more than 120 members of security forces have been killed. The PKK, which is listed as a terrorist organization by Turkey, the United States and the European Union, resumed lethal attacks in July in southeastern and eastern Turkey, where a large Kurdish population lives, following a lull stemming from the government-initiated reconciliation process to end PKK terrorism and improve the lives of the Kurdish community.