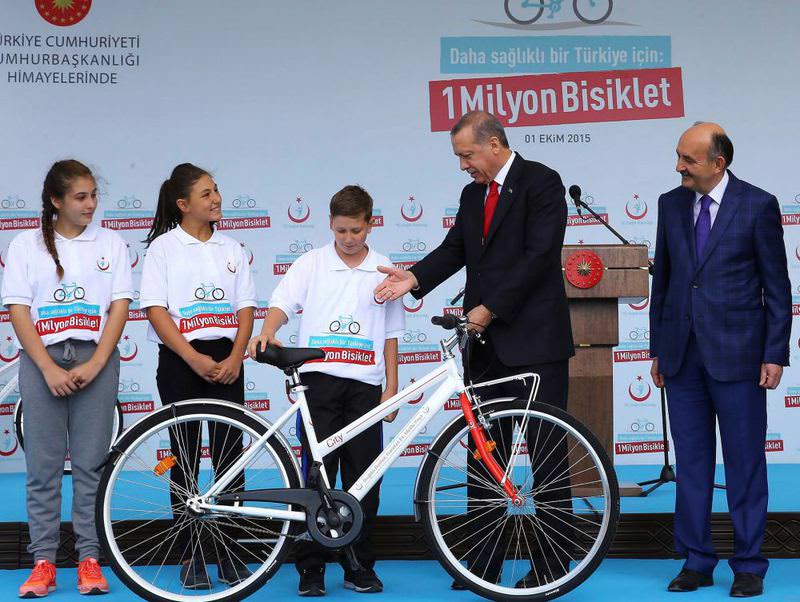 President Recep Tayyip Erdou011fan handed out bicycles to students in Ankara on Thursday during a Health Ministry program to promote bicycle riding to combat obesity.
by daily sabah
Oct 02, 2015 12:00 am

The latest official figures reveal 19.9 percent of individuals in Turkey are obese, a relatively high number in a country of 77 million where unhealthy diets and a sedentary lifestyle are normative

The state-run Turkish Statistical Institute (TurkStat) released the results of the 2014 Turkish Health Survey on Thursday. The survey, which is based on the body mass index values of individuals, found that the percentage of obese individuals was 19.9.

Obesity has been a rising worldwide phenomenon since the 1980s, and according to the World Health Organization (WHO), more than 1.9 billion adults were overweight and more than 600 million people were obese as of 2014.

In Turkey, weight problems, especially among children and youth, are a growing phenomenon according to experts, due to the prevalence of unhealthy eating habits and an increasingly sedentary lifestyle.

İrfan Şencan, the head of the state-run Public Health Agency, said unofficial figures show 71.9 percent of people in Turkey pursue a sedentary lifestyle with minimum physical activity. Şencan said yesterday at an event on healthy nutrition and physical activity that the initial results of a study by the Health Ministry show 58.4 percent of children between the ages of 6 and 11 do not exercise regularly, posing a serious health risk to them in the future.

Figures by TurkStat show that 24.5 percent of women were obese and 29.3 percent were overweight, while these figures were 15.3 percent and 38.2 percent, respectively, for males.

The Health Ministry recently launched a campaign to encourage weekend walks by the public. Health Minister Mehmet Müezzinoğlu occasionally joins the walks along with medical personnel. A nationwide awareness campaign also calls on the public to change their detrimental nutritional habits, to work out or at least take a short daily walk.

Cycling is a highlight of campaigns to battle obesity and promote physical activity. As part of a joint project between the National Education Ministry and the Health Ministry, bicycles are now offered to middle school students enrolled in the bicycle module in elective sports and physical education courses.

The government had already delivered tens of thousands of bicycles to schools, and municipalities have constructed bicycle lanes for public use.

President Recep Tayyip Erdoğan, known for his efforts to promote a healthy lifestyle during his tenure as prime minister, especially with his fight against smoking, champions the new campaign to promote bicycle use. Attending an event yesterday about the campaign titled "Promoting a Culture of Healthy Living," Erdoğan said 40,000 bicycles will be delivered by the end of the year by the government, and a total of 1 million bicycles will be delivered to schools and municipalities by 2018.

The president, a former football player, said he heartily supported the campaign, as someone who played football in his childhood and youth and still regularly exercises. Erdoğan also said he was aware that pursuing a healthy lifestyle was not a prevalent habit among the public.

He said migration from rural areas to cities led to a shift in people's exercising and eating habits, pointing to a culture of healthy nutrition and daily life in the countryside where traditional Turkish sports are a staple of life. "Nearly 80 percent of our population now lives in cities and activities like regularly exercising among the urban population are not prevalent.

Erdoğan said cycling would help curb obesity and obesity-related diseases. "The Health Ministry plans to distribute 300,000 bicycles next year and 1 million in total by 2018. This will be accompanied by campaigns to encourage people to pursue a lifestyle with more movement and exercise," he said.

The president also called on municipalities to build more bicycle lanes and make them a part of roads and streets rather than confining them to parks and recreational areas.