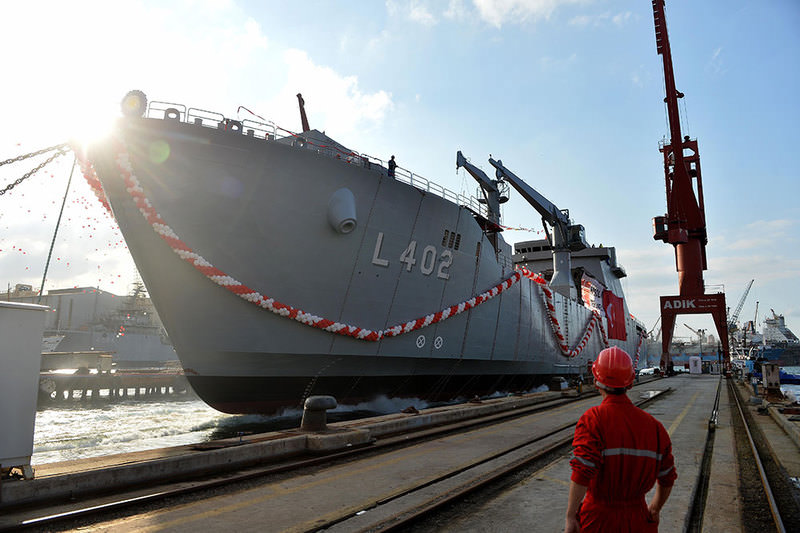 by Daily Sabah Oct 03, 2015 12:00 am
TCG Bayraktar, amphibious tank landing ship designed to carry up to 20 tanks at once, was commissioned in Istanbul's Tuzla district through a ceremony attended by President Recep Tayyip Erdoğan on Thursday.

Erdoğan underlined the refugee crisis faced in the Aegean and Mediterranean seas during his address given at the ceremony, and efforts of the Turkish naval forces to minimize the losses.

Stating that Turkey had to import 80 percent of its defense inventory in 2002, Erdoğan said that Turkey has now reduced its foreign dependency in defense to 40 percent and aims to eliminate dependency by 2023.

"If we want peace, we should be ready for war. We will continue to strengthen our military to ensure peace and calm in our country and the whole world. No one should be bothered by it. This nation's history does not and will not carry the shame of colonialism. We make these investments to deter the ones who set their eyes on our unity and our friends" Erdoğan said.

Erdoğan noted that Turkey had significant improvements by producing two out of eight total ships in MILGEM (national ship) project, along with projects such as national attack helicopter and passenger jet.

TCG Bayraktar, which means flag bearer in Turkish, is expected to be one of the main pieces of Turkish Navy along with its sister-ship TCG Sancaktar (standard bearer), planned to be commissioned in 2017.

140 meter-long ship can cruise with a speed of 18 sea miles and accommodate more than 500 people for a month in the open sea. Equipped with defense systems against fighter jets and submarines, the ship can conduct landing operations on shores with depths lower than two meters. A landing pad enough to carry a 15-ton helicopter is also present on TCG Bayraktar.

Built by ADİK Shipyard in Tuzla, the ship is the outcome of Turkish engineering while its battle command systems and software were designed by national defense contractors ASELSAN and HAVELSAN.

The ship will greatly contribute to adapt Turkey to increasing geopolitical changes and humanitarian crises in the region.