Whirling Dervishes head to Australia to mark a century of peace between Turkey, Australia 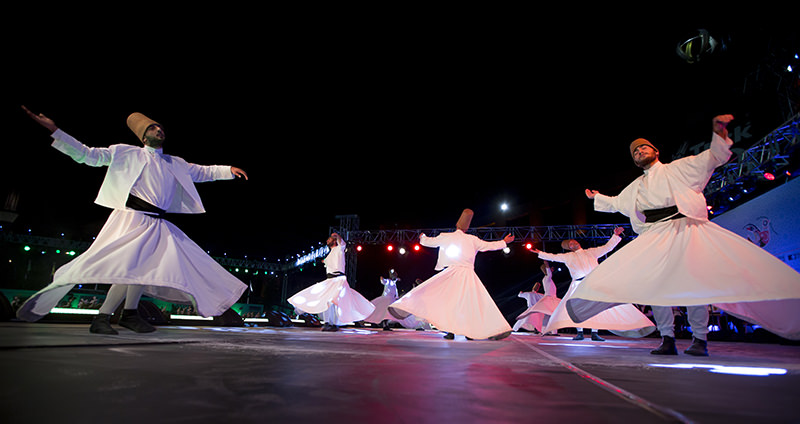 | AA Photo
by Anadolu Agency Oct 04, 2015 12:00 am
Turkey's famous Whirling Dervishes are preparing to fly across the globe to perform Down Under to celebrate the centenary of the First World War battle of Gelibolu (Gallipoli), marking 100 years of peace between Australia and Turkey.

2015 was named the 'Year of Turkey in Australia' in 2012 by former Prime Minister Julia Gillard following a meeting in Ankara with her counterpart Prime Minister Recep Tayyip Erdoğan-currently Turkey's president.

The two leaders had agreed to a reciprocal tribute, deciding that the 'Year of Turkey' would be marked by a series of cultural and other events.

The Australia tour of the Whirling Dervishes of the Mevlevi Order of Konya will entail a series of free concerts, orchestrated by the Turkish Ministry of Culture and Tourism in partnership with the Turkish Embassy in Canberra.

It will kick off Oct. 13 in Melbourne.

Accompanying the dervishes will be the Sufi Music Ensemble, founded in 1989 by the Turkish Ministry of Arts and Culture specifically to preserve and continue traditions of Sufi dance and music, which date back to 1273AD in Konya.

Murat Yücel, a Sydney-based musician and promoter who has been bringing mainly Turkish acts to Australia for the past nine years, told Anadolu Agency on Sunday that he expects large audiences to attend the Whirling Dervishes concerts.

"It holds an appeal for the greater Australian public as well as the Turkish community," he said.

"In recent years Sufi music has become popular in music therapy. It's the tone. In this music there are more natural tones," he added. "Western music is built on semi tones whereas in Sufi music a tone is divided into nine notes, which means it's more complex and has more moods and emotions. That's one of the reasons it induces a prayer induced trance-like state."

The dance of the Whirling Dervishes, also known as the Sema ceremony, has been declared by UNESCO as one of the "Masterpieces of the Oral and Cultural Heritage of Humanity".

The dancers, dressed in a symbolic costume of white robes and a conical hat called a sikke, raise their arms toward heaven and whirl in a counter-clockwise direction.

The ceremony is part of the Sufi movement founded in 1273 after the death of poet, philosopher and mystic Mevlana Jalaluddin Rumi. Since being inspired by Rumi and influenced by Turkish customs and culture, it has remained unchanged.

The Mevlevi order began in Konya and gradually spread through the Ottoman Empire.

"Rumi plays a very important role in the peace process because of his tolerance," he said. "Between our two countries, brotherhood is equivalent to Rumi's tolerance."

Referring to the Sufi philosophy as among the most inclusive worldwide due to its belief in the oneness of the universe, Özçakıl added, "When we say Rumi, we see his humanistic side. He is not only for Muslims... Because God created them [human beings], nationality is not important."

Özçakıl stressed that the origin of Sufism rests on love and tolerance.

"You have to love each human being. The fight is always within us, not with others. Our focus as dervishes is to kill our ego and desire," he said.
"Every dervish has a duty. [As they whirl] they repeat the name of God and they reach to God. But prayers are not enough. You have to do much more."