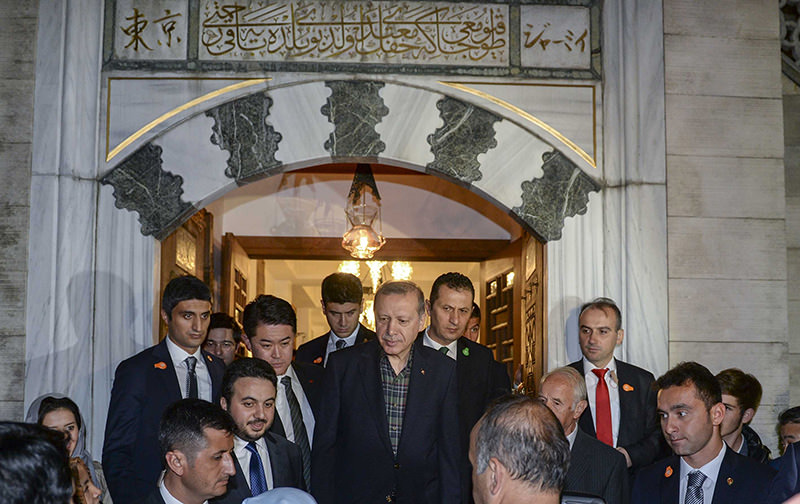 | AA photo
by Compiled from Wire Services
Oct 07, 2015 12:00 am
President Recep Tayyip Erdoğan on Wednesday performed evening prayers at Tokyo Mosque, the largest Muslim place of worship in Japan, during his two-day visit to Japan.

After a welcoming ceremony, Erdoğan headed to the mosque which was built by Turkey. After performing prayers, Erdoğan signed the mosque's guestbook, stating that Tokyo Mosque was one of the most beautiful symbols of Turkish-Japanese friendship.

During his visit, the president talked of ISIS, Turkey's hosting of Syrian refugees, and what he said was the western world's efforts to demonize Islam.

"They don't say 'Christian terrorism' or 'Jewish terrorism,' they only say 'Islamic terror'," he told reporters. "I believe Islam's call of peace will gain more recognition as it orders to build a world without any war."

He underlined that ISIS -- a multinational terror group that has overrun vast area of both Iraq and Syria -- "overshadows" Islam's beauty.
"What Daesh [Arabic acronym for ISIS] is doing has absolutely no relation with Islam," Erdoğan said.

Tokyo Mosque, which also hosts a Turkish culture center, was inaugurated in 2000. Turkey's Presidency of Religious Affairs (DİB) provided funding for the mosque's construction. Tokyo Mosque was built upon the site of a former mosque, built by Muslim immigrants from central Asia, which was demolished in 1986. The mosque, named Tokyo Camii after the Turkish word for mosque, covers an area of over 1,400 square meters and boasts an impressive interior design imagined by a Turkish craftsman. It is a Turkish-style mosque and the marble used for the building was brought from Turkey.

Japan hosts a community of some 10,000 Japanese Muslims and Japan's Muslim expatriate community's population is estimated to near 100,000. Speaking to media outlets, Muhammet Raşit Alas, the Turkish imam of Tokyo Mosque said up to eight Japanese citizens convert to Islam every month. The mosque offers Friday sermons in English, Japanese and Turkish to embrace the diverse community of Muslims flocking to the mosque.