Doğan Media Group under fire for efforts to imprison journalists 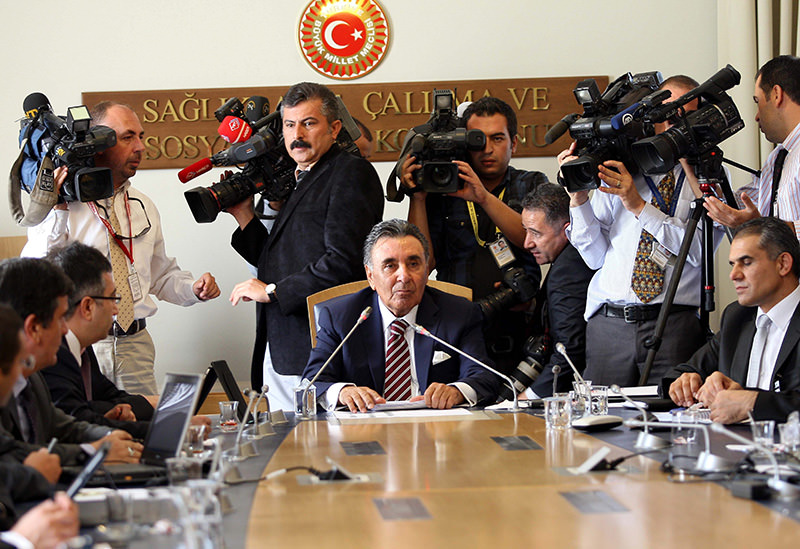 Media mogul Aydın Doğan, who promotes himself as an advocate of press freedoms in Turkey, is waging a war against journalists criticizing him, by seeking prison terms for journalists. A large number of journalists and media companies such as Daily Sabah's parent company Turkuvaz Medya are being sued by Doğan and his news outlets in an act of "hypocrisy," as sued journalists say in reference to Doğan Media Group's complaint over press freedom in Turkey.

Doğan Media Group owns several newspapers and TV stations including Hürriyet and CNN Türk and is at the forefront of a debate over press freedoms. Known for its wide coverage of the imprisonment of journalists for crimes not related to their vocation, media group's lawsuits actively seeking imprisonment of those critical of it are apparently missing from reports in its newspapers and TV stations.

This is much to the chagrin of journalists sued by Doğan, pointing out to "hypocrisy" in defending press freedom while asking the courts to punish those criticizing Doğan and his companies with prison terms of up to six years.

Daily Sabah's sister newspaper Sabah and its journalists, major Turkish newspapers Yeni Şafak, Akşam, Star and Yeni Akit and their journalists face the wrath of the Doğan group after their critical coverage. Doğan responded with numerous compensation lawsuits but what sparked outrage in Turkey's media circles are lawsuits by Doğan asking prison terms for journalists, especially after Aydın Doğan boasted he wasn't filing lawsuits against others "unless he was obliged to" according to an article in his newspaper Hürriyet's website.

Lawsuits by Doğan and his companies ask the courts to slap journalists and media executives with prison terms of one year to six years in various cases involving criticism of the media tycoon.

Mustafa Dolu from Güneş newspaper faces 16 years in prison in total in two lawsuits filed by Aydın Doğan for news articles in April and July 2015.
Hasan Karakaya, a columnist for Yeni Akit newspaper, faces charges of insult to Aydın Doğan for his two columns. A lawsuit asks for his imprisonment for up to two and a half years. In another lawsuit on a column of his critical of Doğan, Karakaya faces a prison term up to six and a half years.

Turkuvaz Medya faces more than 20 lawsuits by Doğan which were filed last year and this year. The company and its staff are the target of lawsuits asking for millions of Turkish liras in compensation. Some lawsuits were rejected by the courts while others are still proceeding.

Türkmedya, which owns Akşam and Güneş newspapers, is another media group targeted by Aydın Doğan. In recent months, 11 lawsuits were filed against Akşam and Güneş, including nine compensation lawsuits and two lawsuits asking for prison terms. Yeni Akit, another newspaper critical of Doğan, suffers from lawsuits by Doğan, with seven lawsuits in less than two months.

Hilal Kaplan, a columnist for Daily Sabah and for the Sabah newspaper, was sued by Hürriyet newspaper for her two tweets. Hürriyet asks for a TL 15,000 in compensation from Kaplan for tweets she denies to contain any insult or threat. "This is a systematic campaign to daunt journalists. They file lawsuits even in the case of minor criticism [of Doğan Media Group]," she says.

Ali Karahasanoğlu, managing editor of Yeni Akit, expresses his disbelief in Doğan group's discourse on press freedom. "They file lawsuit after lawsuit to silence the press. This is the culmination of disrespect to press freedom. It is funny how they criticize the government for stifling press freedom while themselves sued journalists," he says.

Turgay Güler, editor-in-chief for Güneş newspaper, says he faces up to 12 and a half years in prison in total in lawsuits filed by Aydın Doğan. "Press freedom is apparently something they value only when their freedom is 'violated'. Aydın Doğan is not frank on his stance on press freedom," Güler says. He points out that Doğan group advocates press freedom for itself even in terror-related cases in a reference to a lawsuit against Hürriyet over publication of a photo of Mehmet Selim Kiraz, a prosecutor slain by terrorists whose photos with a gun pointed at his head released by terrorists splashed pages of Doğan's newspapers.

Cem Küçük, a columnist for Star newspaper, is among the main targets of Doğan and journalists from his media group. "In one year, Aydın Doğan and Ahmet Hakan [a columnist for Hürriyet] filed about 150 lawsuits against me. In a speech, Aydın Doğan has said columnists should not be sued. I wonder why he himself does so now? This is purely hypocrisy," Küçük said.

Murat Çiçek, chief editor of 24 TV and a columnist for Star, cannot remember how many lawsuits Aydın Doğan filed against him for his columns even his articles did not contain any insults. "Most lawsuits were rejected," he noted. He points to another hypocrisy of Doğan media group and says no news outlets from the group gave wide coverage to a foiled bomb attack on the headquarters of Star newspaper while he and other journalists had criticized a recent assault on Ahmet Hakan.

Ahmet Kekeç, another columnist for Star, is a defendant in seven ongoing cases. "Aydın Doğan had filed countless lawsuits in the past too. Star alone is the subject of hundreds of lawsuits and most of them are related to columnists. His stance on this matter is a shameful double standard," he says.

Ekrem Kızıltaş, the head of Media Association, a nongovernmental organization of journalists, describes "the mindset" of Doğan Media Group: "They are running a business, they are not journalists. If you run a business, you would exert pressure on those writing things against your interests. This is what their thought is. They speak of press freedom often but they immediately go to court when something bothers their interest. Turkuvaz Medya and other media outlets face hundreds of lawsuits but the lawsuits against Doğan Media is only a handful."

Rahmi Çuhacı, the president of the Young Businessmen Association of Turkey, said a subjective view of freedom is a problem. "You should criticize attacks on other media outlets such as attacks on Star if you talk about attacks on the media and you should not hinder press freedoms by lawsuits in every instance [of criticism of Doğan media group]," he said.

Alaeddin Babaoğlu, another businessman, says Turkey has a free press compared to bans on press in Europe and the United States in matters involving national security. "It is great ignorance to claim the press in Turkey is under pressure. You can write anything about anyone and debate everything on TV. Filing lawsuits against other journalists is the only pressure journalists face," he said.