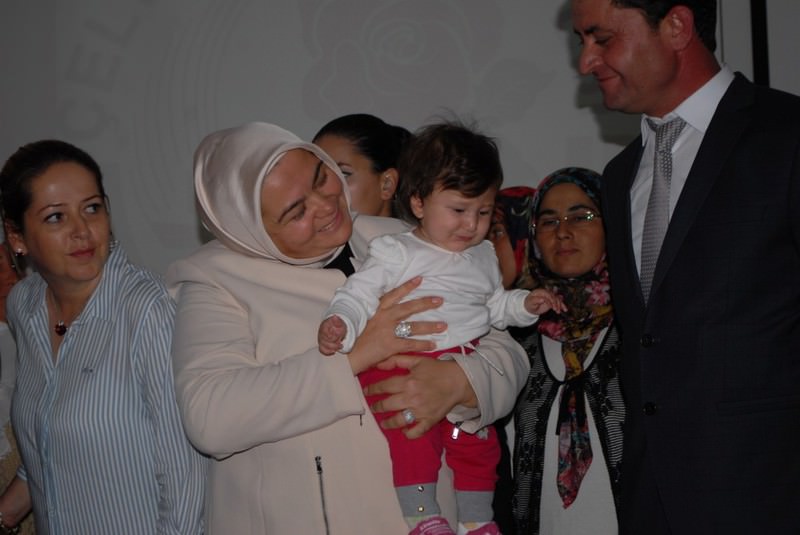 The newly introduced birth aid has caught on, with incdeasing number of people applying, says Family Minister Ayşen Gürcan, who also added that the government was implementing various programs and initiating projects to protect Turkey's children and their future

Family and Social Policies Minister Ayşen Gürcan, speaking to Anadolu Agency Editors Desk over the weekend, said the number of families that received state aid for babies born had steadily increased every month since coming into effect. Gürcan said the aid system introduced on May 15 to address the problem of aging population had proven its worth, noting that in July, TL 33 million ($113.31 million) was disbursed among 77,254 families, TL 38 million among 89,680 families in August and TL 41 million among 96,911 families in September.

Families received a one-time payment of TL 300 for their firstborns, TL 400 for their second child and TL 600 for the third. The minister said families were alerted by an SMS after the birth and then were able to collect the money from their local post office by giving their national ID number. She said nationals living abroad were also eligible to collect the aid.

Gürcan said children under state protection were given classes on values as part of a program jointly executed with the Presidency of Religious Affairs (DİB). "What we call values is really the glasses that we use to look out to the world. Love, respect, compassion, responsibility, environmental consciousness. These are values shared by all cultures. I believe children under state protection need to receive a higher level of education," she said.

She said values had to be practiced not learned, adding that the program's planning stages were complete and would soon be implemented. "There are children pushed into a life of crime or victimized among those under state protection and that's why I believe this program is of crucial importance."

The program is based on love, respect, sharing and courtesy, said the minister, adding, "It will also include manners. Children will be taught how to sit or stand, and how ladies and gentlemen behave, how to express oneself without hurting another."

The national program aimed at preventing violence against children had begun in 2006 with a Prime Ministerial decree, noted Gürcan, adding that the program had introduced a never-before used strategic action plan. "Aims, targets and acts were selected. Children themselves were part of the process of drawing up the plan. The aim is to change the way people look at children. People need to understand that no parent has the right to commit physical violence against their children."

Everyone has to understand that each child is under state protection and has rights, she said. "This is a huge paradigm shift. It was adopted in Europe before us. We now have a law for protecting children," Gürcan noted.

She said now when authorities are alerted, the child was placed in a half-way house and officials started to talk to the family. "Our social workers investigate the matter. If there is truly a problem, the child is placed under state protection as per a court decision even if he or she has parents. However, parents can be rehabilitated. The state needs to intervene if parents push their children to the streets, force them to work or abuse their children." She said when she visited half-way houses, she saw children relaxed after being away from the tense environment at home. "In time, we will strengthen the legal foundations of the process. There are certain deficiencies that need to be addressed. We also share our studies with international organizations," she said.
RELATED TOPICS