First summit of Asian, Pacific Muslims to focus on cooperation 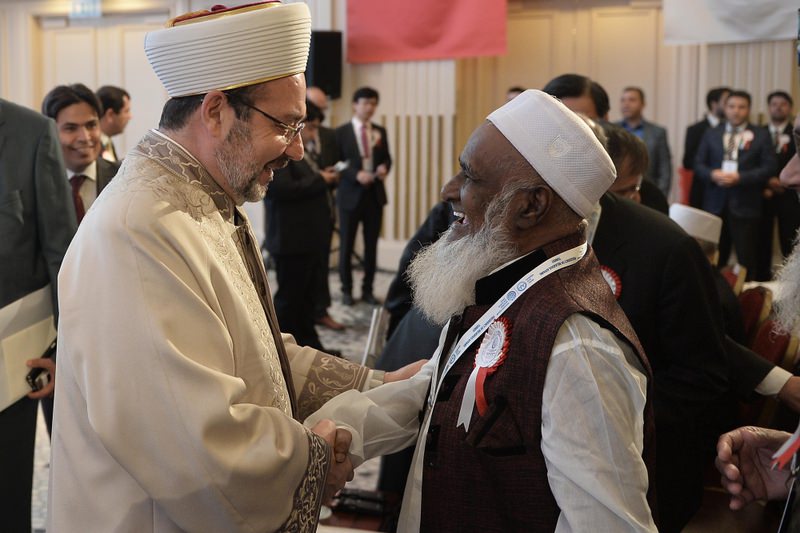 Mehmet Gu00f6rmez (left) welcomed clerics from Asian and Pacific countries at the summit that brings together religious leaders from countries ranging from Afghanistan to Australia.
by daily sabah
Oct 14, 2015 12:00 am

A four-day summit that brings together Muslims from Asian and Pacific countries in Istanbul opened yesterday. A total of 125 clerics from 37 countries, from Afghanistan to Australia and tiny Pacific nations, attended the summit hosted by the Presidency of Religious Affairs (DİB). Speaking at the opening ceremony, DİB head Mehmet Görmez said the summit aimed to re-establish religious, historical and cultural ties between Muslim countries and communities in Asian and Pacific countries and Turkey.

The summit, which is called "Unity in Multiplicity: Rethinking Peace and Wisdom Together," focuses on cooperation with Muslims in Asian and Pacific countries, exchanging ideas on problems the Islamic world is encountering and discussing solutions, re-establishing historical ties with Muslim countries and communities in the Asia-Pacific region, discussing opportunities for cooperation in religious education and services.

The event opened with prayers and a speech by Görmez. He said the summit's main purpose was to "re-establish brotherhood we have long neglected." "We are here to exchange knowledge with brothers we haven't met for decades," he said, recalling close relations between Turkey and Asian and Pacific countries during the rule of the Ottoman Empire, which represented the global caliphate. "It is unacceptable that our relations, which were warm during Ottoman rule, have scarcely developed in this age of advanced communications," Görmez said. "We have to ask ourselves why we know so little about each other when there are still sermons being delivered in Thailand about our shared history, when we are aware that Muhammad Ali in India held conferences in support of the Turkish War of Independence and the fact that Muslim scholars in Deoband (India) set up a society for the same purpose, and we are aware that Ottoman Empire sent military support to Aceh (Indonesia) in the 16th and 19th centuries against Portuguese and Dutch invaders," he said.

The DİB president said two thirds of the Muslim world was in Asian and Pacific regions. He said the summit does not aim to impose any thoughts on Muslim communities or take problems from other parts of the Islamic world to those regions. "This is a meeting to discuss cooperation opportunities after a long period of inaction. We are meeting to exchange experiences on providing religious services addressing our age's needs," he said.

Görmez said the Muslim world was going through troubled times, noting that Central Asian Muslims were striving to rebuild their Muslim identities, while Islamic civilization in Africa is besieged by occupations, exploitation and poverty. "Islamic civilizations were destroyed by violence, by wars, and they are still being ravaged. The Islamic world is being confronted, and there are faulty views of religion that present it as dirty wars and jihad, monopolizes Islam's truth and declares those not following their faith as apostates. This faulty view of religion should never contaminate peaceful Muslims of the Asia-Pacific region. This requires a reinforcement of religious education and services," Görmez said.

DİB is at the forefront of efforts for Muslim solidarity, especially in the wake of rising Islamophobia, terror attacks and wars in Muslim countries. In the past decade, it has organized several events that bring together Muslim clerics from around the world, including a summit of Eurasian Muslims, the African Countries Religious Leaders Summit, a convention of European Muslims, a meeting of clerics from Balkan countries and a summit of religious leaders in Latin American and Caribbean countries.