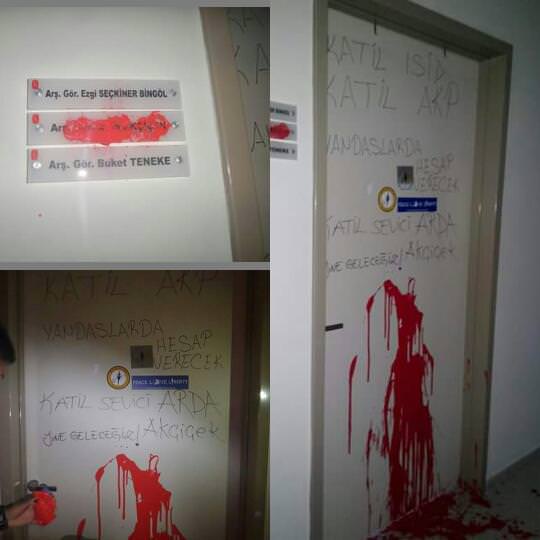 Twitter photo by @kolektifler
by daily sabah
Oct 14, 2015 12:00 am
A leftist group who call themselves "Öğrenci Kolektifleri" (Student Collectives) vandalized the room of Ankara's Hacettepe University Academician Arda Akçiçek by writing threat notes on the door and marking it with red paint on Wednesday.

Akçiçek's nameplate was scratched out and painted red, while his room's door was splattered with red paint in a way that resembled blood. "We will come back," the vandals wrote on the door and posted photos of their "work" on social media along with other threatening messages.

Disrupting the peace in the university, the group received a lot of criticism on social media.

Various reports suggest that Öğrenci Kolektifleri was founded by a group of students in 2006 as an advocate of student rights, free and equal education. The group is reported to have branches across 30 universities in Turkey.