Journey to Europe worth the risk for disabled Syrian refugee 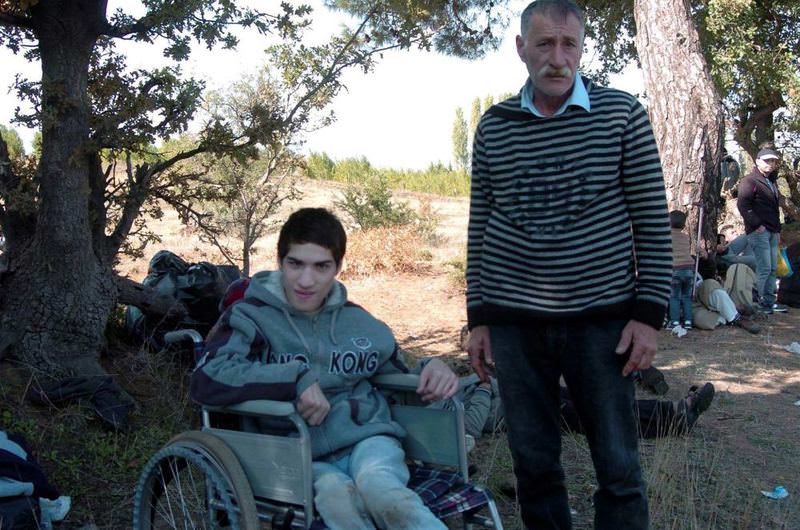 Haytham Dahan with his father, Saleh. With no end in sight for the Syrian war, he joined others searching for a better life in Europe. Others preferring to stay in Turkey benefit from a new UNICEF aid program.
by Daily Sabah with Wires
Oct 21, 2015 12:00 am

Haytham Dahan, a mentally disabled and wheelchair-bound Syrian teen, accompanies his father on a journey from Turkey to Europe, preferring the perilous voyage by sea to his war-torn home country, like thousands of others risking their lives every day

Traveling to the Greek islands from the Turkish coast despite bad weather and overcrowded boats is no small feat for Syrian refugees who solely depend on life vests and their poor swimming skills. But one teenager has to defy more odds for a safe arrival to the islands, the nearest gateway to Europe for refugees in Turkey.

Nineteen-year-old Haytham Dahan was among 350 refugees intercepted by Turkish security forces on the outskirts of a mountain in northwestern Turkey. The group was walking to the coast to board dinghies when they were stopped. Dahan, with his wheelchair pushed by his father through rugged paths and forests, was sticking out among the crowd tirelessly walking with the few possessions they had. Turkish officials thought his only obstacle for travel was the wheelchair, something he would not be able to sit on while he would be huddled with scores of others aboard a rubber boat. But it was later found out that Dahan also suffered from a mental disability and a speech impediment. His only companion in the journey was his father Saleh, who helps his son to eat, as the young man also has a medical condition affecting his hands. "He was born this way. He can hear but can't speak. Only I know what he says," Saleh Dahan says. "We had no choice but to flee (Syria). My son is very scared of the war. He did not want me to leave him there. So, we hit the road together," he says.

Young Dahan had difficulty in answering reporters' questions but he managed to make a gesture of swimming with his hands when asked how he planned to reach Lesbos, the Greek island the refugees were heading to before they were intercepted.

The father and son are part of an influx of refugees from Syria where the four-year-old war is further aggravated recently by a new push by the regime forces with the aid of Russia in the country's ongoing civil war.

Turkey is a major transit point for refugees looking to reach Europe. According to figures from the Turkish Coast Guard, more than 60,000 people were intercepted on the Aegean and Mediterranean Seas this year and more than 140 people died when their boats capsized and sank.

Refugees pay all they have to human smugglers to cross to the Greek islands with the proximity of Turkey's lengthy coast to the Aegean Sea, but smugglers either defraud them or simply supply them with boats that are not seaworthy. Fake life vests filled with sponges that are sold for cheap to refugees add to the woes of refugees who take the risk despite multiple deaths.

The Coast Guard stepped up measures and patrols of the sea and shores in May after a surge in the number of refugees, but the number of refugees kept rising, especially after the rising threat of the Islamic State of Iraq and al-Sham (ISIS) in Syria and Iraq, the two neighbors of Turkey. Turkey has more than 2 million Syrian refugees and only a small number of them live in refugee camps across from the Syrian border while many others struggle to survive on the streets.

In İzmir, a western city on the Aegean Coast which saw an unprecedented flow of refugees this summer, Syrians, some armed only with their hope to travel to Greece one day, live with little means and little prospect of a better future.

United Nations Children's Fund UNICEF launched a new aid program for refugees in the city for the first time yesterday. Families living in squalid conditions are being handed hygiene kits composed of soap, toothpaste, towels, shampoo, shaving foam and diapers. 5,000 families will benefit from the program. Speaking to Anadolu Agency, Agit Kasim, a Syrian who arrived in İzmir three years ago after fleeing civil war in his country, said they barely had money for food and could not afford personal care.