General elections a testament to Turkey's passion for democracy 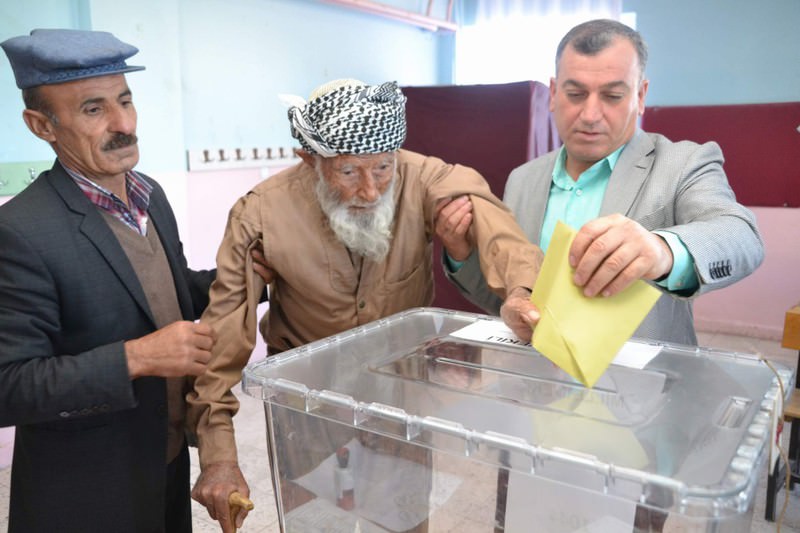 Older than Turkey's democracy at the age of 104, Mehmet Esen joined his fellow centenarians, voting with shaky hands and a firm confidence in democracy.
by Daily Sabah with Wires Nov 02, 2015 12:00 am

Democracy is a relatively new concept in Turkey's history, as the first multi-party elections were held only 65 years ago. This late introduction all the more endeared it to the public. Sunday's general elections, repeated due to the failure of all parties to form a coalition government after the June 7 polls, showed once again how eager the nation is when it comes to voting. Senior citizens, some above the age of 100, headed to polling stations with the aid of relatives, wheelchairs and canes to cast their votes despite the challenges along the way. Polling stations, almost all located in schools and at times on the second floors of schools, usually lack elevators or wheelchair ramps, but this did not daunt elderly voters who were carried by family members.

İsmet Şahbaz, 67, from the southern city of Adana, can barely get out of the bed he was confined to after a recent traffic accident led to fractures in his pelvis and legs. Determined, he called the local municipality and asked for an ambulance. Paramedics assisted Şahbaz to the polling station on a stretcher.

In the western city of Bursa, Birsen İri carried her 80-years-old mother on her back from the courtyard of the polling station to the voting booth on the second floor.

Mehmet Esen, who claims to be 104 years old, was accompanied by his grandchildren to a polling station in his hometown of Siirt in the east. The elderly man expressed hope the election would "restore brotherhood in Turkey" between Turks and Kurds. His hometown is located in a region where tensions are high due to terror attacks by the PKK, which claims to fight for Kurdish self-rule in the predominantly Kurdish region.

Esen was not the only centenarian who overcame walking difficulties and a string of diseases to cast their vote. Hüseyin Yavuzkurt, 115 and Meryem Baltacı, 106, were accompanied to ballot boxes by relatives.

Enthusiasm for democracy also weighed in for Gizem Çevlik, who got to a polling station in her hometown of Nevşehir in central Turkey minutes after giving birth to a baby girl. She made it to the polling station on a stretcher "to execute her right of citizenship."

Old age was not the only obstacle for voters. In Yüksekova, a district of the southeastern city of Hakkari, voters had to travel for kilometers to reach polling stations as access to some schools used as polling stations was blocked by ditches dug by terrorists who recently clashed with security forces. In the eastern city of Bitlis, military helicopters transported election workers and ballot boxes to some villages due to security concerns over land transportation with the PKK occasionally setting up roadblocks. Over 2,000 soldiers were deployed across the city for security measures throughout the elections.

For a group of street vendors in Gökçeada, an island in the Aegean Sea, bad weather posed a challenge to voting. Vendors who had arrived on the island to set up stalls in an open-air marketplace could not return to the mainland to vote as strong winds led to the cancellation of ferry service from the island.

A village in the east likely broke the record for lowest voter turnout. Only two people, an elderly couple, voted in the election at Yolveren, a Yazidi village outside the eastern city of Batman. Mehmet and Hame Alcu are the only residents of Yolveren, a village that had 16 households, but the rest of the village's residents had migrated abroad.

In other places, voters complained of a lack of proper places to vote. In the village of Sarıkavak in the western city of Eskişehir, which lacked a building to be set up as a polling station, villagers set up ballot boxes in the town square and cast their votes amid the stench of livestock dung and dust clouds.

The same was the case for a village in Batman where 137 voters voted outdoors due to the lack of a school or large building to be used as a polling station.

The elections, as usual, were not without cases of violence, although it ended smoothly in most places.

In the eastern city of Iğdır, a deputy candidate for the Justice and Development Party (AK Party) was attacked by a group of assailants when he objected to irregularities in voting. Nurettin Aras and his entourage were rescued by security forces when a group they accused of committing voting fraud attacked them with stones and sticks. The angry crowd damaged Aras and others' cars and injured an election worker. Aras told reporters that a group of some 30 people were illegally casting votes together for a certain party. "When we told them to stop, they insulted us and a quarrel broke out," he said. "We were trapped at the polling station for one hour," he said.

In the northwestern city of Kocaeli, a brawl broke out between AK Party supporters and those of the Peoples' Democratic Party (HDP). Two people were injured in the brawl, which stemmed from a dispute over party members misleading a visually-impaired voter. Muzaffer Bıyık, an AK Party local representative, claimed HDP members attacked his party's official at the polling station. "We have two members there and there were 20 people who assaulted them. They were hospitalized," he said.

In Ceylanpınar, a district in the southeastern province of Şanlıurfa, three people were injured when a group of HDP members engaged in a quarrel with a group of voters from another party.
RELATED TOPICS