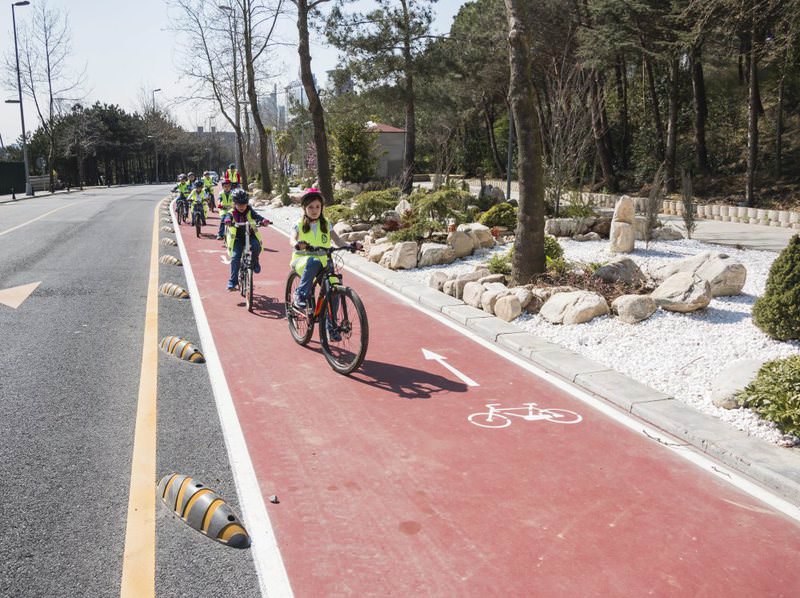 Children cycle on a bicycle lane in Istanbul. New bicycle lanes will have higher standards and more integration to mass transit hubs.
by Yusuf Ziya Durmuş Nov 04, 2015 12:00 am

The government enacted a new regulation for bicycle lanes in a country where cycling culture flourishes thanks to newly initiated healthy lifestyle campaigns. The new regulation marks a first in Turkey for setting up safe lanes for cyclists

A long-awaited set of bicycle lane regulations finally arrived Tuesday. The new regulations usher in higher standards for bicycle lanes in cities where cyclists have often complained about the paucity of cyclist-friendly routes.

Under the new regulations, existing bicycle lanes will also be modified to comply with the new rules. Cycling in Turkey has witnessed a renaissance as the government has organized a health campaign to combat sedentary lifestyles and obesity. However, cyclists face several obstacles when riding in crowded cities, namely lanes that will save them from riding on congested roads and reckless motorists.

To address this problem, a number of metropolitan municipalities recently unveiled plans to build more lanes solely dedicated to cyclists.

The new set of regulations will expand existing lanes and add more bicycle parking spots. The bicycle lanes will also enable cyclists to travel from the remotest parts of cities to the city center without facing too many obstacles. The lanes will be equipped with clear signs showing their distinction from roads used by motor vehicles. Space permitting, roads with two cyclist lanes will be installed in some cities. The regulations also require lanes to connect to mass transportation hubs in a bid to promote the usage of mass transit as ever-growing cities like Istanbul suffer from acute traffic problems. The regulations also call for the modification of buses to accommodate bicycles.

More importantly, the regulations require the planned construction of roads to new settlements to include spaces for bicycle lanes.

New bicycle lanes are already in the works, and President Recep Tayyip Erdoğan pledged to personally inspect the lanes. "We should abandon the mindset that cycling is only a hobby and should view it as a means of transportation," the president said during a recent event to promote cycling.

The government also launched a new campaign last month for endearing the country's youth to cycling. Tens of thousands of bicycles were delivered to schools across the country for students to use in physical education courses. A total of 1 million bicycles are expected to be delivered by the end of 2015. The government is also supplying bicycles to municipalities adding new bicycle lanes to cities.

Murat Suyabatmaz, the president of the Turkish Cyclists' Association, a non-profit organization promoting cycling in Turkey, says Turkey should do more than merely regulate bicycle lanes. "It will succeed if you have people who admire cycling and promote a cycling culture. It is like delivering computers to students. It will be useless if you don't teach them how it can enrich their learning. Some municipalities do not comply with existing standards and they build lanes simply to show off the fact they built lanes. We hope new regulations will change this," he said.

Suyabatmaz, whose association advised the ministry on new regulations, said it was an important step to regulate the lanes and it should be "followed up" with new acts to improve the state of cycling in Turkey. "Cycling is highly esteemed in developed countries. It contributes both to the economy and health. Turkey itself may save billions of lira every year if bicycle-use becomes more widespread," he said.

Still, a change of mindset is needed, Suyabatmaz says, especially in terms of the position of cyclists in traffic. "I was talking to a Turkish taxi driver in the Netherlands. I asked him what he thought of cyclists, a common sight in that country. He told me he despised them because they 'forced cars to wait' when they crossed the road. He was unaware how getting more bicycles would help ease the traffic. The public should be more aware of how cycling would contribute to its wellbeing," he said.

Another aim of the bicycle promotion campaign is to lessen the pollution generated by motor vehicles. Speaking to an Anadolu Agency correspondent, Selami Merdin, an official from the Ministry of Environment and Urban Planning, said cyclists help decrease carbon dioxide emissions. "If bicycles could account for 10 percent of inner city transportation means, it would lead to a 948,000-ton decrease in emissions per year," he said. Merdin noted that cars contribute heavily to emissions in Turkey.
RELATED TOPICS