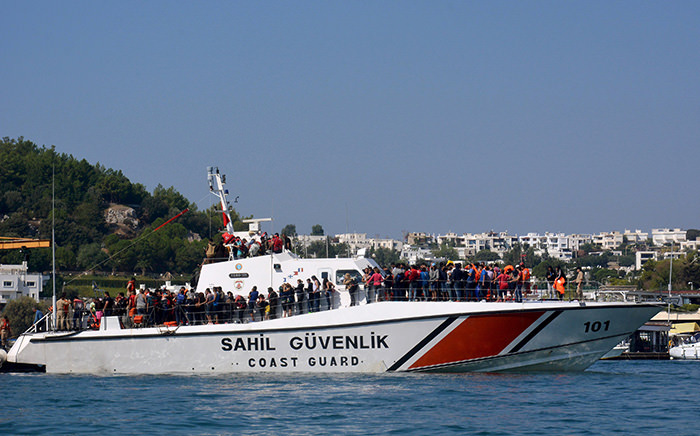 Refugees rescued from a capsized boat wait to disembark from a Coast Guard ship in the resort town of Bodrum, in Mugla province September 15, 2015 (Reuters Photo)
by Daily Sabah with AA
Nov 04, 2015 12:00 am
At least 129 refugees, mostly Syrian, have been rescued off the coast of Turkey's western Muğla province.

The Wednesday operation followed a failed attempt to reach the nearby Greek island of Rhodes, Turkish coast guard officials have said.

Refugees were reported to have arrived in Gemiler Bay on Tuesday and stayed in the woods overnight. A 14-meter day-trip vessel packed with 129 Afghan and Syrian refuges, 33 children among them, then sailed towards Rhodes and was just 5 kilometers (3.1 miles) away when its engine broke down.

The Turkish Coast Guard discovered the scene during a scheduled patrol in the early hours of Wednesday. The refugees, including a number of babies, were taken on board the Turkish craft.

At least 3,138 refugees, including the 291 people in the Aegean Sea, have died crossing the Mediterranean Sea so far this year, according to International Organization for Migration (IOM).