Four years after its discovery, German neo-Nazi gang still in the shadows 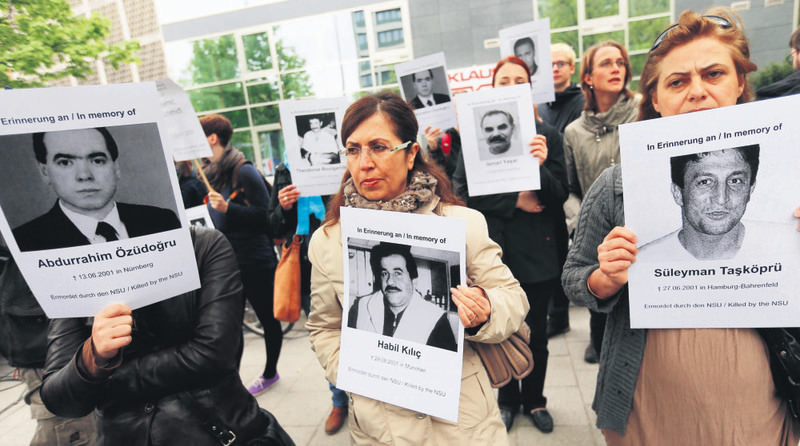 Protesters hold photos of NSU's victims outside a courthouse in Munich where Beate Zschaepe, the sole surviving member of the gang, stands trial.
by Daily Sabah with AA Nov 05, 2015 12:00 am

It has been four years since the NSU, a neo-Nazi gang of three, was found responsible for a string of racially motivated killings and bombings. But many suspect a larger organization helped them, as lawmakers repeat calls for a wider investigation into the gang

One of the most shocking crime sprees in the recent history of Germany came to light when the bodies of two men sharing the same name and a dire purpose were found in a mobile home in Eisenach, Germany, on Nov. 4, 2011. Uwe Mundlos and Uwe Böhnhardt had apparently committed suicide after police closed in on the duo following a robbery. What followed was the startling revelation that the two men, along with their female accomplice Beate Zschaepe, who is currently standing trial, were behind a series of murders targeting Turks and Greeks as well as bombings in migrant-populated neighborhoods. The trio called themselves the National Socialist Underground (NSU).

Four years later, Zschaepe, the only survivor from the gang, is still in detention, while a lengthy trial that started in 2013 is still underway, and suspicions are ripe that the NSU did not act alone in the murders, as German intelligence turned a blind eye to their activities.

Özcan Mutlu and Konstantin von Notz, two lawmakers from the opposition Green Party, believe that not every connection of the gang has been revealed and that there are many unanswered questions concerning the investigation and subsequent trial.

Speaking to Anadolu Agency, Mutlu pointed out that authorities simply "stumbled on the case" in 2011, long after the murders of eight Turks and a Greek between 2000 and 2006, which were notoriously branded the "döner killings" by German media and initially blamed on internal strife between immigrants. He said the trial was clear evidence that a murderous trio cannot be solely responsible for the murders and bombings. Mutlu said the gang had supporters, but it could not yet be proven. He added that failures by the state's security services had already been proven by an investigation into the crime spree. "For some reason, the killers got away in the instant of their imminent capture. It looks like somebody notified them beforehand. We cannot prove it, but too many intelligence failures lead us to ask questions," Mutlu said.

He said the trial was prolonged because it was difficult to assess evidence in the murders committed by the NSU since "evidence was destroyed, along with files on the NSU in the archives of intelligence services." "Two defendants already died and another one has not spoken in three years," he said, pointing to the silence of Zschaepe during the entirety of the trial. "It is a difficult case. Besides, every official from security and intelligence services suffer from some sort of memory loss," he said ironically. "They don't 'remember' what happened. So, we have a grim situation regarding the case," he said.

Mutlu also pointed to other "strange occurrences" during the trial, such as a witness found on the roadside after suffering from "an odd diabetes-induced coma" and the discovery of the body of another witness. "These are odd coincidences. Something is fishy in this case," he said. Last year, Thomas R., a witness that claimed to be an informant for the German intelligence agency, died of previously undiagnosed diabetes. In March, Melisa M., another witness, died of a pulmonary embolism. She was the ex-girlfriend of another witness with ties to the NSU, who himself died under mysterious circumstances two years ago.

"Hopefully, we will prove that these murders are not the work of three people but rather a greater organization," he said.

Mutlu's remarks echo a common sentiment in Germany about the role of the German intelligence agency in the murders, especially after the death of Thomas R., a well-known militant in neo-Nazi circles who reportedly worked as an informant for intelligence services. Reports in German media had claimed that he supplied thousands of files about the gang to intelligence agents in 2005, long before the discovery of the NSU.

Von Notz said he was disturbed that the NSU murders have yet to be fully investigated despite a pledge by German Chancellor Angela Merkel. Von Notz said he and other lawmakers managed to convince other parties to establish a second parliamentary committee to inquire about the activities of the NSU, adding: "Everything should be revealed. There are many questions left unanswered. We have to exert efforts to shed light on this case." He stressed that theories were abound on the case. "Some say the murders were committed by only these three people, and there is a debate about whether some murders were random. All these should be investigation. This case should also be investigated further, especially in light of the refugee crisis and escalating attacks targeting foreigners and refugees," he said.

After the discovery of the NSU, it was revealed in the trial that the gang had connections to informants recruited by the German intelligence agency, which raised the question of whether intelligence officials had knowledge of the gang's activities and deliberately ignored it.

Lawyers for the Turkish victims of the attacks had complained earlier that the German state failed to shed light on the gang's "connections" to German intelligence services.
RELATED TOPICS