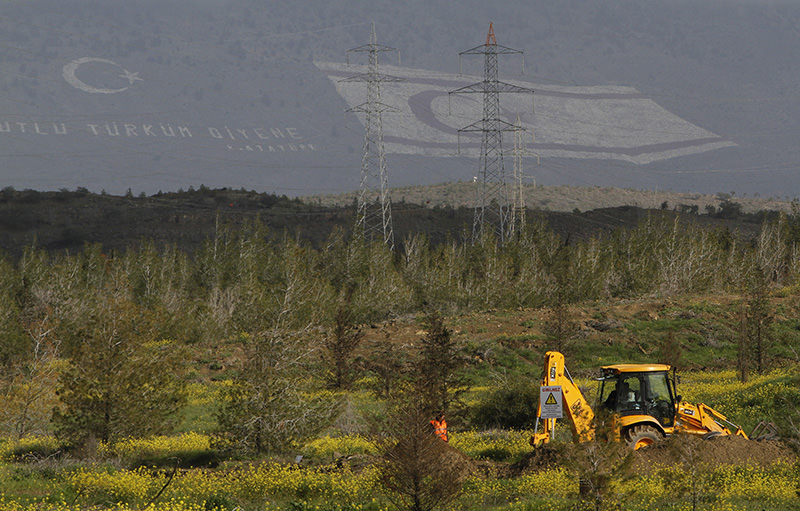 In this Feb. 9, 2010 file photo, the flag of the Turkish Republic of Northern Cyprus is seen on a mountain in the background as an expert from the Committee on Missing Persons searches for human remains at a field near Nicosia, Cyprus (AP Photo)
by Emre Diner Nov 05, 2015 12:00 am

In a breakthrough move and step toward reconciliation in divided Cyprus, the Turkish Cypriot side and the Turkish army agreed to provide access to graves in military-controlled areas for a search of those who went missing in past conflicts

As Turkish and Greek Cypriots look to reconcile in divided Cyprus, a formal announcement yesterday will likely add new momentum to efforts. Turkish authorities approved requests for a search of the graves of persons missing in the past conflicts between the two communities in a landmark step.

Thirty sites that are currently located in areas controlled by the Turkish military, which intervened after rising violence toward Turkish Cypriots in 1974, will be opened to the Committee For Missing Persons (CMP), a United Nations-supervised team of researchers who search for those who went missing in the 1960s and 1970s and are presumed to have been murdered in extrajudicial killings.

Reconciliation talks to resolve the long-standing problems between the two communities are expected to ultimately lead to a reunification of the island. The bid gained traction again following the election of Mustafa Akıncı. This new step comes roughly six months after the moderate leader was elected.

Murat Soysal, a Turkish Cypriot member of the CMP, said excavations in nine sites across the island are underway, including two for missing Greek Cypriot nationals and two Turkish Cypriots named İbrahim Nidai and Şevket Kadir. Bodies presumed to be of Kadir and Nidai, who went missing and were reportedly killed by Greek Cypriots in 1963, were found in a charcoal pit in Girne (Kyrenia) in August, after an 85-year-old Greek Cypriot, who said he helped dump the bodies, came forward.

Soysal said they were tipped off about the assumed location of mass graves where bodies of up to 50 Greek Cypriots were dumped and search sites for missing bodies included a river bed, a military site near a prison and fields.

Fotis Fotiou, the Greek Cypriot Presidency's Commissioner for Humanitarian Issues and Overseas Cypriots, told Daily Sabah that the international community was contributing to efforts to locate the missing persons, noting that the European Union has spent 11.5 million euros since 2006 and Turkey has contributed 664,000 euros. Fotiou said they want Turkey's to further its contribution to the issue. "(Access to military zones) is an important step. We can be more successful in locating the missing with the help of Turkish archives (regarding the missing). We are grieving not only the missing Greek Cypriots but also the Turkish Cypriots. Likewise, we will be pleased when steps like these are taken for the good of the two communities," he said.

A large number of people went missing in the 1960s as tensions between Turkish and Greek Cypriots escalated and turned into a conflict building up with abductions and extrajudicial killings. Though the Turkish military operation in 1974 succeeded in stopping the killings, burial sites of missing persons remain unclear and identification work in discovered bodies takes a long time. Time remains the main obstacle to identifying the bodies as forensic teams' meticulous work to identify the victims are hindered by a lack of witnesses and relatives after all the time that has passed.
Last Update: Nov 05, 2015 11:36 pm
RELATED TOPICS