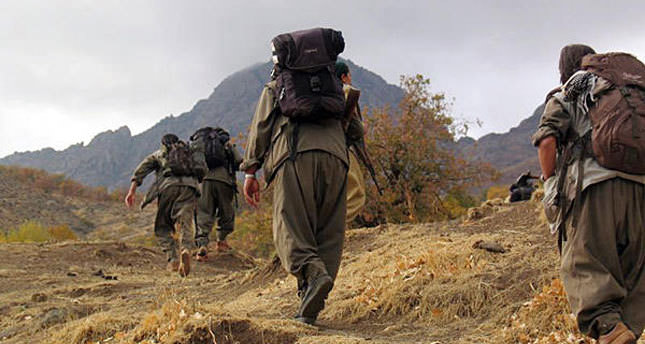 by daily sabah Nov 05, 2015 12:00 am
The PKK terrorist organization said Thursday it had ended a truce it had declared ahead of Sunday's election. The Turkish military began air and ground operations against the PKK in Turkey and Northern Iraq in late July, as the PKK renewed its armed campaign against the Turkish state following a two-and-a-half-year cease-fire.

The announcement came a day after Bese Hozat, a senior PKK figure, suggested that the pro-Kurdish Peoples' Democratic Party (HDP) passed the 10 percent election threshold last Sunday thanks to the PKK's activities in the southeast. Claiming that the HDP was not powerful enough to rebuff the policies of the Justice and Development Party (AK Party), Hozat said: "Ultimately, the result achieved by the HDP is not enough."

HDP members had made remarks considered controversial in relation to the PKK and its Syrian-affiliate Democratic Union Party (PYD) and its armed People's Protection Units (YPG). The HDP received 13 percent of the vote in the June 7 elections, but lost around 1 million votes on Nov. 1 to the AK Party, which won 49.4 percent of the vote. Some suggested that this loss was due to the HDP's inability to convince the PKK to disarm. People in the predominantly Kurdish southeastern provinces have grown weary of the PKK's activities, which include digging ditches, using human shields, detonating bombs, suicide bombings and kidnapping children to recruit to the organization.

President Recep Tayyip Erdoğan said on Wednesday that the ongoing operations against the PKK would continue until the organization leaves the country for good. "They say that 2,000 Kurdish people have been killed by the state. Excuse me, you have to learn that this state never shoots at a Kurdish citizen, this state shoots at terrorists," Erdoğan said.

Emphasizing that the new term ahead of Turkey is focused on yielding results rather than disputes, Erdoğan commented on the reconciliation process that is currently "in the freezer." "If a name is sought for this reconciliation process, it is now the 'National Unity and Brotherhood Process,'" Erdoğan said.

Erdoğan also condemned municipalities in certain southeastern provinces. Harshly criticizing the municipalities for abetting the PKK, Erdoğan said: "Digging ditches in the streets is a betrayal. These ditches were dug to block security forces from getting in there and make life difficult for citizens. How were these ditches dug? With the heavy equipment of municipalities belonging to the party you know well."

He accused the municipalities of transferring funds through companies close to the PKK when assigning the task of filling in the ditches.

The PKK is recognized as a terrorist organization by the U.S., EU and Turkey. Formed in 1978, the group had been fighting the Turkish state for an independent Kurdistan until the early 2000s. The group then shifted its goal to autonomy in predominately Kurdish regions of Turkey.

According to a report submitted to the National Security Council (MGK) and the Cabinet, the PKK stockpiled 80,000 rifles over the course of the cease-fire when it was allegedly pulling back, considering a possible urban war. However, while the PKK was piling up arms in the east and southeast, a cease-fire was declared in 2013.

Having unilaterally declared the end to the cease-fire on July 11, the PKK stepped up terrorist attacks across the country, leaving dozens of security officers dead and many more wounded.

Even though Ankara has been accused of disrupting the reconciliation process and cease-fire by some, the PKK has carried out 2,099 acts of violence in Turkey since the beginning of 2015, security authorities' statistics show. These acts include armed attacks on police and civilians, assaults with stones and sticks, bombings, hijacking and abduction.

The PKK has also targeted infrastructure. After the end of the cease-fire the organization threatened the building of new infrastructure, saying: "As of now, all dams and machines used to construct dams will be targets of our guerilla forces."

With the addition of this report, indicating that the PKK has been stocking ammunition during the cease-fire period in eastern provinces, it can be argued who has exploited the reconciliation process and cease-fire.

Ankara stands against violent terrorist attacks, launching airstrikes in Northern Iraq on PKK targets. Following the operations, all PKK hideouts have been destroyed and hundreds of terrorists have been "neutralized." Turkey has received support from top officials from Europe, the U.S. and other international organizations with regard to its counter-PKK operations. U.S. President Barack Obama reiterated his support, saying: "The PKK engages in attacks against Turkish targets; it is legitimate for the Turks to try to defend themselves."
Last Update: Nov 05, 2015 4:07 pm
RELATED TOPICS