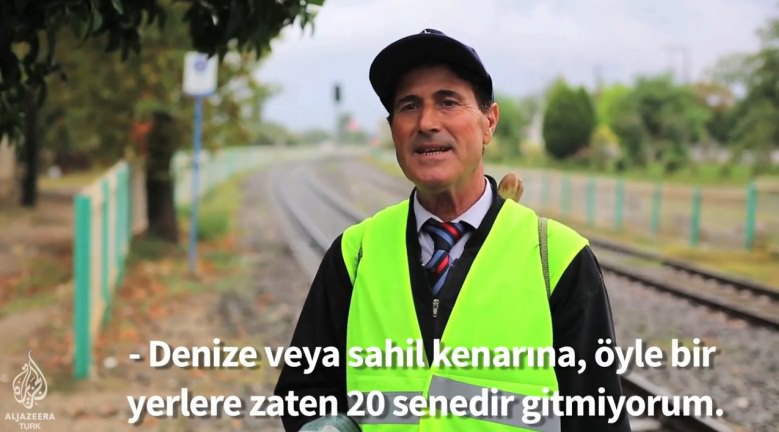 The daily life and humble complaints of a 59-year-old railway track inspector has become a trending story in Turkish social media circles. Recently, social media users launched an online campaign to send him on vacation, as he hasn’t been on one for the last 20 years

The story of 59-year-old İbrahim Çivici, who works as a railway track inspector for the Turkish State Railways (TCDD) for the last 20 years, has become one of the most touching and popular articles over the last couple of years for Turkish audiences.

In Güray Ervin's article titled "Never ending road" (Bitmeyen yol) published on Al Jazeera Türk, Çivici spoke about his job and daily life in a very simple manner. As one of the few remaining people carrying out this profession, Çivici told a day in the life of a railway inspector. Walking 15 kilometers a day and 75 kilometers a week carrying heavy equipment all by himself, Çivici inspects the Sultanhisar – Atça line in Turkey's western Aydın province for the last 20 years. The challenges of his profession not only include extreme heat, rain or snow; but also stray dogs, jackals, wild boars or snakes.

With his apparent Ege (Aegean) dialect, Çivici tells that sometimes he feels sorry when railroad engineers/train operators do not recognize him whilst passing by. "When trains are passing by, we exchange greetings (by waving or using the train whistle) with the engineers. But sometimes they do not wave at me. At that moment, you feel a bit low" Çivici said.

His humble complaint on for how long he hasn't gone on a vacation was the source of inspiration for the online campaign. "To the seaside or to the beach, it has been 20 years since I haven't been to a place like that. We haven't been to such a place as family. We go to our hometown when we have the chance" Çivici said in the video.

The response of the users who watched the video was to launch a campaign on the online petition site Change.org. Titled "20 year TCDD employee, who walks 15 kilometer a day, İbrahim Çivici should be awarded a motivation present (if possible, with his family)" and addressed to the TCDD's human resources department and tourism companies, the petition managed to bring 68,606 signatories to the cause (when this article was being written, the number reached 70,400) in just 6 days and only 6,394 short of the 75,000 goal.

The impact of Ervin's article on Çivici was not limited to this petition that would probably send Çivici on his long desired vacation. Two days later, Çivici told Ervin that a train stopped by to greet him. "I was watching a level-crossing between Sultanhisar and Atça for a day. The train operating for the Nazilli – Söke line started to slow down as it came near the crossing. It slowed down and stopped right in front of me. I said 'what's the matter, is something up?'. The engineers told me 'Sergeant Ibrahim, we hear you were offended by us, when we saw you we wanted to stop by and say hi, to make it up to you' and then they left" said Çivici. He added that he was very happy but also surprised as it was the first time he was greeted in such a way.

Some users signing the petition for Çivici commented that such campaigns should also be made for all laborers working years and years for so little.

The article said that there are currently 59 track inspectors working for the TCDD, while new lines have automated systems to detect problems in the tracks.
Last Update: Nov 05, 2015 7:48 pm
RELATED TOPICS