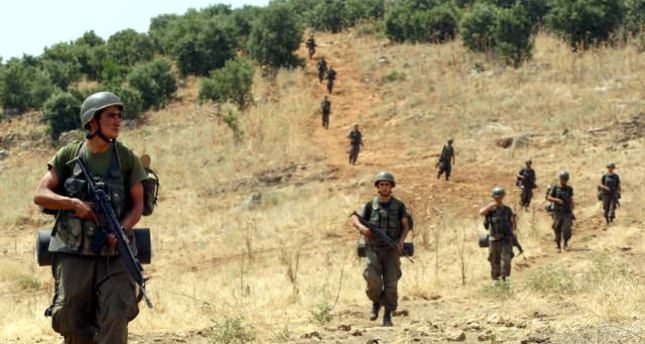 by Daily Sabah with AA
Nov 07, 2015 12:00 am
The Turkish Armed Forces has released details of a 40-day air and land operation on the terrorist PKK's mountainous bases in Turkey's southeastern Hakkari province.

According to local army sources, the operation - named after Staff Lt. Col. İlker Çelikcan - was launched on Sep. 27.

Çelikcan - killed in action in Hakkari on Sep. 7 - has been the highest-ranking Turkish soldier to die in recent renewed fighting with the PKK.

The recent operation targeted the area from Buzul Mount and İkiyaka Mountains to Doski Valley in Yuksekova district, where the PKK aimed to declare a "safe zone" and stronghold for itself.

Military sources maintained that during the solution process which began early 2013, PKK terrorists dug the mountains with drilling machines and placed Russian-made DShK anti-aircraft guns, creating several shelters and positions for them.

The area is of strategic importance as Dağlıca village is the sole access point in the region, and Oramar Hill is a fortified place overlooking the Dağlıca Border Battalion, Keri Hill and Pey Hill Border Posts.

During the operation that lasted till Nov. 5, Turkish soldiers thoroughly searched the mountains and valleys - reaching the mountainous places that the PKK terrorists called "impossible to climb" - and destroyed the positions, shelters and caves used by terrorists one by one.

The anti-terror operations were joined by two commando brigades and troops from Turkey's special forces. It was conducted jointly with air force fighter jets, sometimes in temperatures as low as -15 Celsius at night in steep, rocky areas.

A total of 119 PKK terrorists were killed while several IEDs that terrorists planted on the roads as well as materials and chemicals used in their fabrication were seized during the air and land operations.

Six soldiers were killed by the PKK terrorists during clashes.

Turkish security forces have responded to renewed PKK attacks in the southeast by launching airstrikes on PKK bases in northern Iraq and the army has sent ground troops across the border, killing nearly 1,000 terrorists.

In early September, Turkey also sent two units of its special forces, comprising 230 troops into northern Iraq for the first time in more than two years to pursue PKK terrorists across the border, a military source said.
Last Update: Nov 07, 2015 2:27 am