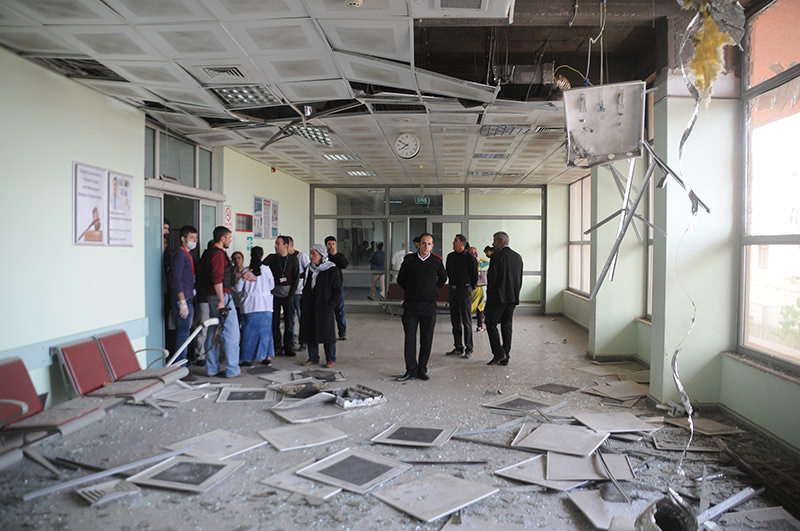 | AA photo
by daily sabah
Nov 09, 2015 12:00 am
A hospital was heavily damaged on Monday when terrorists from the PKK fired a mortar at a hospital in the southeast, allegedly while targeting a police vehicle near the building in the town of Cizre. This is the second attack where a public hospital was damaged by the terrorist organization in less than a month, after a car bombing left another hospital and a number of buildings damaged in another town.

Militants from the PKK, which stepped up attacks since July, were apparently aiming at an armored police vehicle with mortar fire when it hit a wing of a hospital where dialysis patients stay. No casualties were reported in the incident as the wing was empty at the time of the attack. But heavy damage in the building forced authorities to relocate more than 30 patients to other hospitals.

In a statement, the Health Ministry said they were working to repair the damaged areas of the hospital and dialysis equipment that was destroyed in the incident. The ministry said the hospital would remain open. "This is not the first attack against patients and our medical staff by the PKK. It is a blatant violation of people's right to get medical care. The terrorist organization continues its heinous attacks against people, medical workers, hospitals and ambulances," the statement said.

Following the attack, a clash broke out between security forces and terrorists in the small town. Intense street clashes led to the closure of businesses throughout the day while students at a primary school were sheltered in the basement of their school during the hours of the clashes.

The terrorist organization killed dozens of soldiers and police officers since they resumed their attacks following a bombing in southeastern Turkey that was blamed on the Islamic State of Iraq and al-Sham (ISIS), a foe of the PKK's allies in Syria. More than 30 civilians also perished in the renewed violence.

Hospitals, clinics and medical staff are among the primary targets of the terrorist organization, particularly to cut off medical aid to security forces. Health workers working in two regions complain of death threats by the supporters of the PKK against them, warning them not to help soldiers and police officers wounded in the clashes with the terrorist organization.
Last Update: Nov 09, 2015 5:48 pm