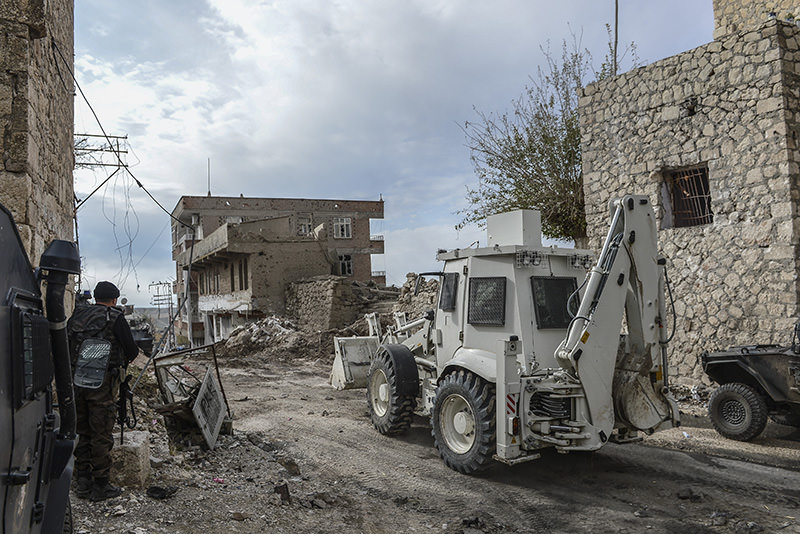 Silvan (AA photo)
by Daily Sabah with Agencies
Nov 09, 2015 12:00 am
A taxi driver was killed and five other people, including a police officer, were wounded on Monday when PKK terrorists clashed with security units in Diyarbakır's Silvan district.

Silvan, located about 80 kilometers east of Diyarbakir, the biggest city in the mainly Kurdish southeast, has been under a week-long police curfew imposed as security forces battle members of the PKK's urban wing, the Patriotic Revolutionist Youth Movement (YDG-H). PKK terrorists have wreaked havoc on the district through setting off roadside bombs and carrying out other terrorist activities.

A 45-year-old cab driver was killed during the most recent clashes, and an elderly man was wounded when his house was hit by a shell, agencies reported.

As the Turkish Armed Forces (TSK) continues to conduct effective operations against the PKK and rid the southeastern mountains of terrorists, security forces will now reportedly step up efforts in urban areas to crack down on the YDG-H. After operations against PKK hideouts in northern Iraq weakened the organization and destroyed much of its weaponry, the sole obstacle standing in the TSK's way is the YDG-H.

The TSK has been combating terrorists near the northern Iraq border since Sept. 27 and cleared the İkiyaka Mountains and Cilo Mountain of PKK forces. The operations have reportedly broken the PKK's back. During the operations, security forces seized a large amount of food supplies meant to keep PKK fighters fed for at least six months. With winter approaching, the terrorist organization could find itself in a difficult position. Meanwhile, a statement released following a high-profile security meeting on Wednesday said the counterterror operations against the PKK in Turkey will continue into the winter.

In a meeting held at the prime minister's office, Prime Minister Ahmet Davutoğlu instructed the TSK to continue its operations against the terrorist group during the winter without slowing down.
Last Update: Nov 09, 2015 5:39 pm