Stars in their eyes, villagers hunt meteorite for dollars in eastern Turkey 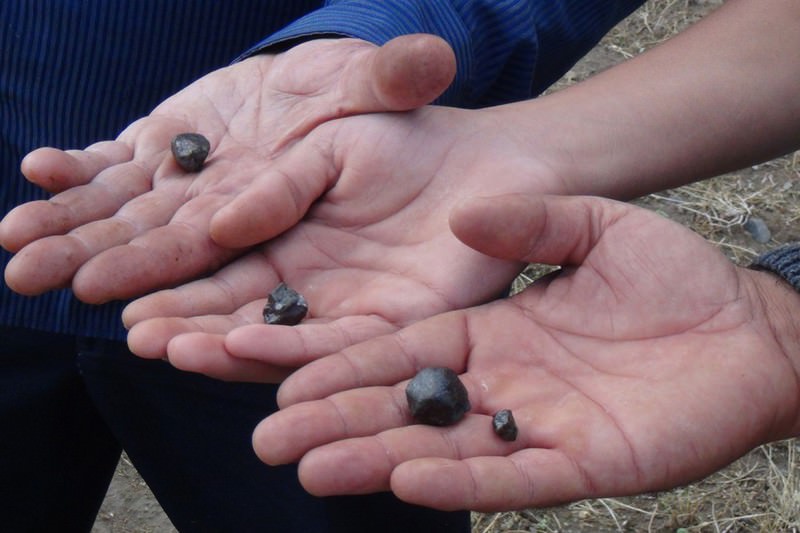 by Daily Sabah with Wires Nov 10, 2015 12:00 am
Residents of Sarıçayır, a small village in the eastern province of Bingöl, had no idea how a piece of debris from the sky would bring windfall profits to them two months ago. The debris in question, however, was "a space debris" commonly known as meteorite or pieces from a larger asteroid and as the villagers found, it was a precious find, with people such as scientists and collectors willing to dig deeper in their pockets for each piece.

Since that fortunate day, Sept. 2, rumors slowly engulfed this small village that a substantial sum would be paid for each piece of meteorite retrieved. Soon, villagers joined a hunt for pieces, along with people from all across the country and the globe descending to the village to grab a piece of meteorite.

Speaking to Doğan News Agency, a villager said one gram of meteorite is sold for as much as $60. "Russians buy it, Germans look for it here. By God's will, everyone will find a piece, especially poor people," Mehmet Nezir Ergün said. He said that the meteorite also created a tourism boom in the village, which is otherwise not a touristic destination. "Only last week, people in the village earned $200,000 from visitors (paying for meteorite prices)," he said. Ergün believes more people will come, claiming that meteorite collectors from other countries contacted locals via the Internet to learn more about the pieces whose sizes range from one gram to one and a half kilograms.

Villagers have already found some 30 pieces but it is not known how much is left of the meteorite. They say it is difficult to find more pieces as it crashed in an area dotted with swamps.
RELATED TOPICS