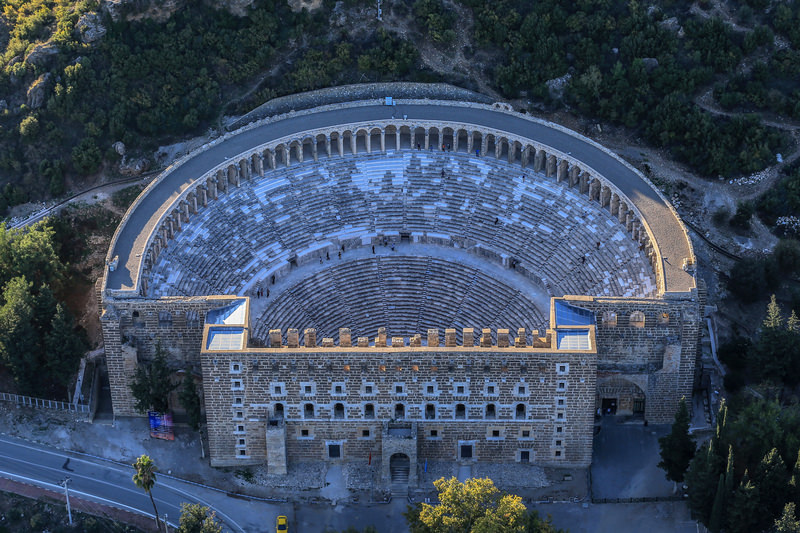 Anadolu Agency photographers have collected impressive photos of Antalya, which has been home to several civilizations for thousands of years, to display at the G20 summit on Nov. 15-16

A team of Anadolu Agency photojournalists has put together a collection of the most impressive aerial views of Turkey's southern Antalya province, the location of the upcoming G20 summit.

The summit, scheduled for Nov. 15-16, will be held under the auspices of the Turkish presidency of the G20 at the Regnum Carya Hotel and Convention Center, and the event will bring together some 13,000 officials and delegates from member countries. About 3,000 journalists from around the world are expected to follow the summit.

The photo collection showcasing Antalya's natural and historical riches include the ancient cities of Phaselis, Aspendos, Perge and Side, as well as the Temple of Apollo, the province's renowned Konyaaltı Beach, its castle, Düden Waterfall and its vast golf courses.

The G20 is the premier forum for its 19 member countries and the EU. The revolving G20 president invites several guest countries each year to its annual meeting.

The G20 was formed in 1999 as a meeting of finance ministers and central bank governors in the aftermath of the Asian financial crisis. Later in 2008, the first G20 Leaders Summit was held and the forum played a key role in helping member countries respond to the global financial crisis. Since then, G20 leaders have met nine times.