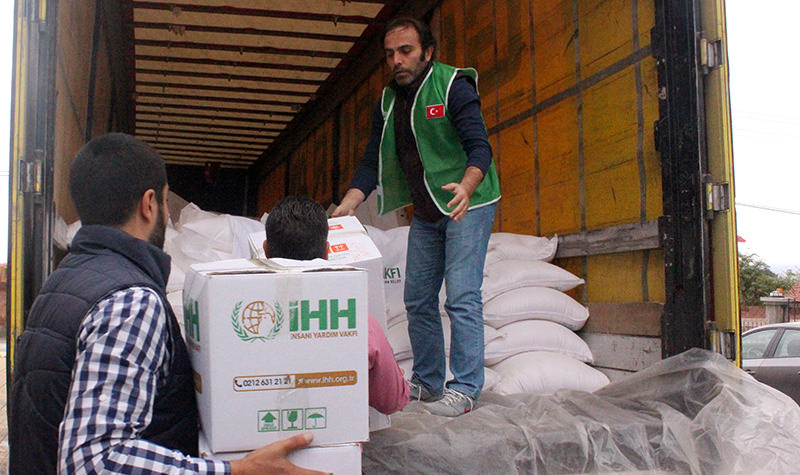 | AA Photo
by Compiled from Wire Services Nov 12, 2015 12:00 am
The "Winter Campaign" spearheaded by the Turkey-based Humanitarian Aid Foundation (İHH) will deliver aid to hundreds of thousands of Syrians, as well as needy people in 23 countries.

The campaign was introduced yesterday in Istanbul. Bülent Yıldırım, head of İHH, said they aimed to reach over 2 million people across 23 countries who are in need of food, blankets, clothing and medical care.

Syrians will be among the major recipients of the aid due to the civil war in the country that has left millions displaced and with little means to survive in a war-torn country and the countries they have taken shelter in. Yıldırım said the winter campaign would address the people's primary needs. "We determined that people would need six basic things, such as food for babies, winter boots, blankets, gloves, et cetera," he said.

Since 2011, more than 250,000 people have been killed in Syria, which has become the main source of refugees and displaced people seeking shelter in other countries. According to United Nations figures, about 3.9 million Syrians are refugees and at least 7.6 million are internally displaced. Turkey received the most refugees during the ongoing conflict.

More than 2 million refugees are now in Turkey but only a small fraction of them stay in refugee camps set up by the Turkish government. The rest either live on their own or prefer traveling to Europe for asylum. Though Turkey is praised for its generosity towards refugees by the international community both by charities and the government, it struggles to address all of the refugees' needs. Turkish authorities complain that international assistance for refugees has been scarce.

United Nations figures show some 13.5 million people inside Syria are in need of humanitarian aid.