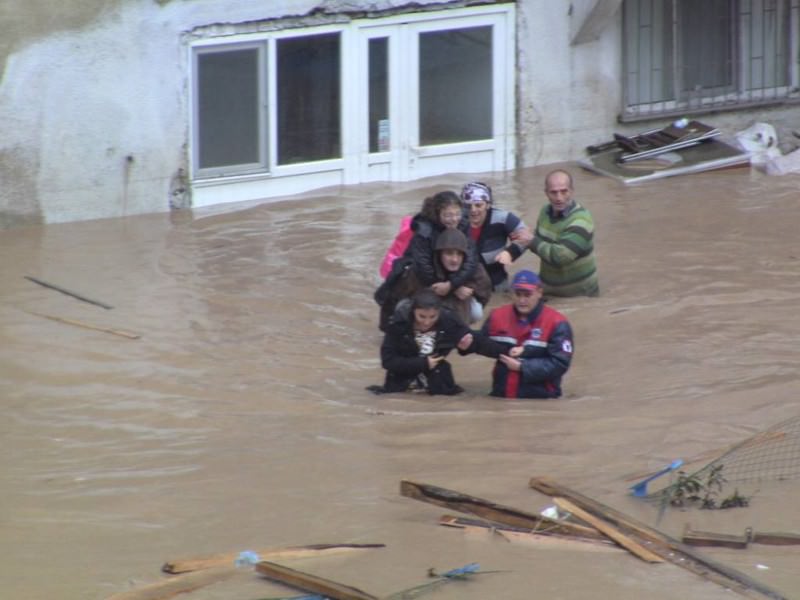 by Daily Sabah Nov 14, 2015 12:00 am
Floods and landslides claimed two lives on Wednesday and Thursday in Artvin, a northeastern Turkish city where 10 people were killed in landslides in August.

The scale of the disaster was only revealed on Friday when workers started cleaning debris-strewn roads, as floodwaters receded. Houses near streams were particularly affected by the floods and subsequent landslides. Drainage of floodwaters and the removal of soil, which almost buried multi-story buildings, were carried out by crews.

The Borçka district was the heaviest-hit area in the city. A 3-year-old girl living on the second floor of an apartment building died after she was buried alive by a landslide. A 74-year-old man also lost his life when a landslide engulfed him in front of his house. Eleven others were injured in the disaster.

Meteorologists said heavy rain would continue in the city on Friday and the weekend, warning people of a possible repeat of floods and landslides.

On Aug. 10 people were killed in Artvin's Hopa district after heavy rain triggered floods and landslides, leading to a collapse of residential buildings. The heavy damage and fatalities are blamed on faulty housing developments.

Buildings constructed on streambeds were among the most affected by the floods and landslides. Experts say the Black Sea region where Hopa is located is already prone to heavy rainfall throughout the year, and a new solution is needed, such as housing reforms to prevent deaths and damage. The region is marked by steep hills, and mountains that run parallel to the sea, and the uneven elevation proves a major challenge for housing.

One measure is steel nets installed on steep hills next to busy roads. The nets help to hold heavy rocks shifted by landslides. Still, relocation of housing units built on riverbeds and the reinforcement of river embankments pose a major challenge.
RELATED TOPICS