Rage against Iran over ‘inherent' racism toward Azeris 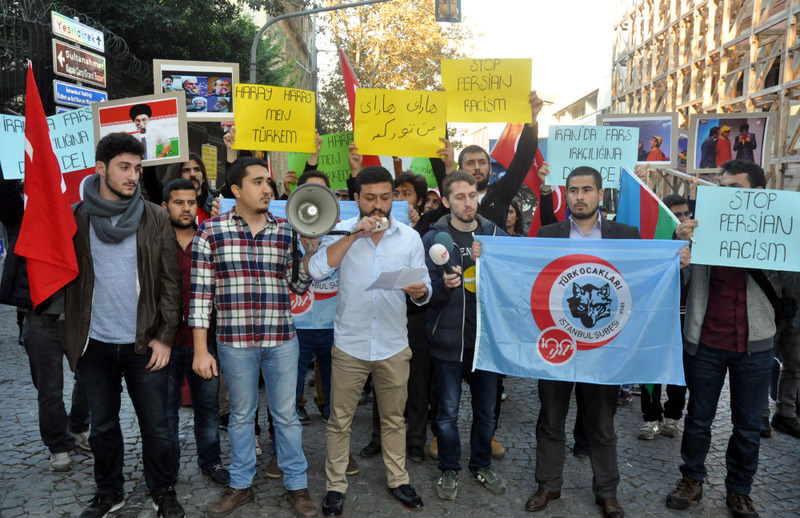 Protesters denounced Iran for racism in a rally outside the Iranian consulate in Istanbul.
by daily sabah
Nov 14, 2015 12:00 am

Discrimination against ethnic Azeris in Iran, which culminated in slurs made on a TV show, continues to draw outrage. Turks staged protests against Iran in Istanbul on Friday and more protests are planned across the country over the weekend

A blatant slur made against the Azeri community on a children's TV show in Iran has sparked outrage in Turkey, which shares an ethnic bond with the ethnic community.

On Friday, a group of protesters organized outside Iran's Istanbul consulate and several nongovernmental organizations announced more protests are planned for Saturday and Sunday.

Protesters left a black wreath and toilet brush at the gates of the consulate in reference to the slur made on Iranian TV.

Speaking on behalf of protesters, Mustafa Oğuz Yavaşcan said it was alarming that "one of two communities which shared the same fate in the same country for centuries insulted the other." He referred to past instances of Azeri Turks being insulted by Iranian state media, adding that they were concerned that racist attacks against Azeri Turks were becoming "systemic."

Activists said they condemn the IRIB-2 and showrunners. "Iran is party to a United Nations convention on human rights which calls for respect to basic freedoms of people and their dignity. It is unacceptable to claim racial supremacy," Yavaşcan said.

Protesters denounce the Iranian regime for tolerating racist portrayals of Azeri Turks and overall discrimination against the community whose numbers are approximately 30 million in Iran. They represent the largest ethnic group after Persians in Iran.

Last week, Azeris in Iran took to the streets after IRIB-2, a state-run TV channel, aired an episode of a children's show, Fitilehha (Candle Wicks), in which an Azeri boy was shown brushing his teeth with a toilet brush and Azeris were portrayed as "dirty" people. Protests in Iran continued throughout the week and spread all across the country. According to unconfirmed reports, dozens of protesters were detained by Iranian authorities in the protests.

Anti-Iranian demonstrations quickly spread to Turkey and Azerbaijan where people took to the streets to denounce continuous discrimination toward the Azeri community of Iran where violation of minority rights is a common problem according to human rights organizations.

In 2006, scores of people were killed and wounded when violent demonstrations broke out in Iran after a state-run newspaper published a cartoon depicting Azeris as cockroaches. The Azeri community had also staged protests in August 2011 after Urumieh Lake, located in an area with a high concentration of Azeris, dried up, dealing a blow to Azeri farmers. They have accused the government of ignoring the locals by not taking steps to prevent drought.

According to experts, Azeri Turks in Iran have little means to express their demands for more rights and even a single instance of discrimination triggers protests. Though Azeri Turks have a considerably large presence in Iran, their language is not recognized officially, hence, their call for education in their own language is ignored by Tehran.

Yalçın Sarıkaya, a Turkish expert on international relations and author of the book, "Nationalism in Iran," says Azeri Turks in Iran are more than a minority. Speaking to Anadolu Agency, Sarıkaya said they were important actors in shaping the political history of Iran for centuries. "It is quite normal for Azeris to react against insults by a company run by the state as they never consider themselves as a minority or a newcomer to Iran. They are part of Iran as much as Persians are," he says. Sarıkaya says repeated insults made against Azeris shows Iran "did not learn its lessons from the 2006 crisis," referring to protests against the cartoon insulting Azeris.

Dr. Muhammad Mohebbi from Iran's Shahid Beheshti University says continuous protests despite an apology by authorities over the TV show, which was scrapped after the reaction, showed protests are not simply about the show. "It has moved fault lines in Iranian society," Mohebbi told Anadolu Agency. He describes the fault lines as a contradiction between genders, secularists and conservatives, Shiites and Sunnis and the state and the public. "In the regions where Azeris predominate, a nationalist sentiment runs high which in turn has fueled demands for greater rights by the Azeri community in the last decade," he said.