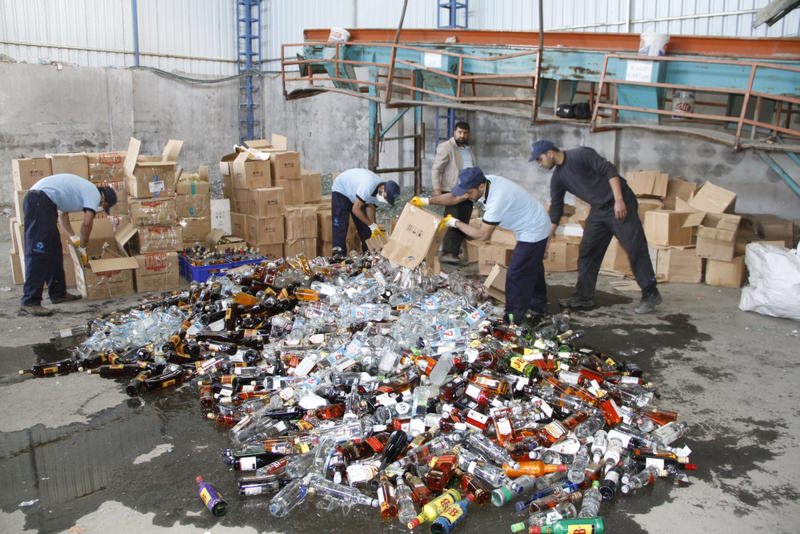 Workers demolishing bottles of bootleg alcohol, which has claimed 34 lives since last month in Istanbul.
by Emir Somer Nov 16, 2015 12:00 am

Bootleg liquor, which claimed 34 lives last month in Istanbul, is popular among Turkish drinkers who prefer it despite known dangers, because of its low price

Istanbul was rocked by a wave of deaths in October stemming from bootleg liquor consumption, 10 years after nearly 30 people died of poisoning from bootleg alcohol in the city. Thirty-four people succumbed to poisoning in less than one month and more than 100 people were hospitalized after drinking bootleg rakı, a popular aniseed-flavored beverage.

The large number of deaths show that neither Turkish drinkers nor bootleg liquor producers learned lessons from past deaths and still turn to bootleg drinks. This is despite the known risks of its consumption, which can cause death, loss of sight, heart diseases, liver failure and other serious conditions.

Bootleg drinks claimed about 10,000 lives across the world over the past decade and more than 100 people fell victim to the deadly beverages in Turkey. They are especially popular in poor, underdeveloped countries or in countries like Turkey where acting without precaution is modus operandi for some drinkers. It is, after all, where a motto of recklessness, "doing it once wouldn't kill," was born, a saying used for people taking drugs or drinking alcohol.

Authorities confiscated more than 5 million bottles of bootleg drinks over the past year and this figure might be higher with those that go undetected, showing the large presence of a lucrative, illegal sector. What distinguishes the distillers of bootleg alcohol from the real deal is actually one letter. Instead of ethyl alcohol, an expensive chemical present in the composition of genuine drinks, they turn to methyl alcohol, a cheap substitute that is originally used in the production of varnish and other industrial substances. The methanol content in the substance is distilled in the process and video tutorials on social media help amateur bootleg drink producers. Other distillers prefer smuggled ethyl alcohol to keep the quality high though those drinks are still deadly as their distillation process are not monitored or certified like the genuine drinks. Ethyl alcohol are smuggled mainly from Bulgaria and Romania, hence the name of "Bulgarian rakı" for bootleg beverages. Along with those distilled with methyl alcohol, they are sold in bottles that look legal to end users and in state-licensed vendors who trick their customers by justifying the low price - as low as TL 5 ($1.75), almost 1 percent of the price of original rakı - by low cost of imports from Bulgaria. Most customers are aware of the real origins of bootleg liquors but they conveniently ignore it for the sake of prices.

Turkish police stepped up efforts against bootleggers after the surge of deaths. Twenty-one people were detained for the production of bootleg drinks and they face charges of manslaughter. More than 20 vendors and stores selling drinks were shut down. Police reports show the sale of drinks concentrate in six districts on Istanbul's European side including Küçükçekmece, Avcılar, Bağcılar, Bayrampaşa, Esenler and Fatih where secret distilleries and warehouses where bootleg drinks are stored, along with sellers, are located. Eighteen deaths in Istanbul were from drinks bought in Küçükçekmece.
RELATED TOPICS