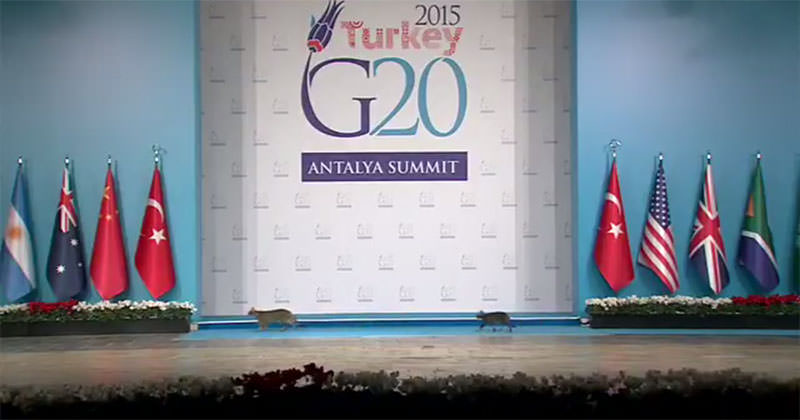 
The leaders of world's most powerful countries were not the only guests of the G20 Antalya Summit. Stray cats broke tight security measures and appeared at the reception stage on Sunday, to the surprise of many.

According to reports, the cats showed up on the stage as reporters were preparing for live broadcasting.

Strolling from one end of the stage to the other, the cats sniffed flowers and left the scene.

Found in almost every corner in Turkey, cats are an inseparable part of the streets and are known for their friendly nature, loved and fed by the people.

The heads of the Group of 20 leading world economies arrived in the resort city of Antalya for a two-day summit.

This is the first G20 summit Turkey has hosted since assuming the G20 presidency last year.

The hotels housing the summit's attendees were separated from the rest of the neighborhoods and only accredited visitors were granted access to the area. Antalya Governor Türker said they installed more than 350 new cameras, license plate and facial recognition systems in the area to prevent unauthorized access.

Coast Guard boats have also been deployed off the coast of Antalya to prevent any security threats from sea. Officials are also considering establishing a no-fly zone over the area.

The G20 leaders are due to address the migration crisis as well as terror attacks during their discussions.

The Antalya summit comes amid a renewed diplomatic push to resolve Syria's bloody conflict, which started with peaceful protests in March 2011.

Top diplomats from the United States, Russia and other key regional and international powers agreed Saturday on a road map for a political transition in Syria, during talks in Vienna.