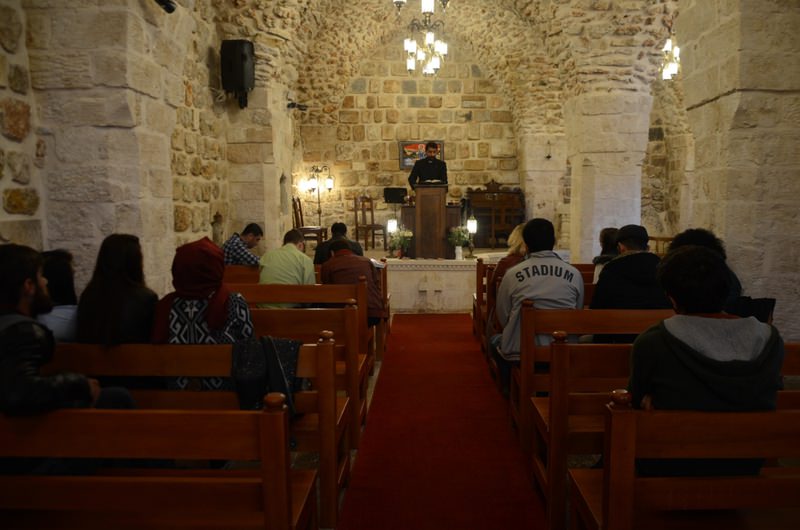 Rev. Ender Peker presides over the first religious service at the church in Mardin's Artuklu district.
by Daily Sabah with AA Nov 17, 2015 12:00 am

One of the oldest Protestant churches in Turkey reopened on Sunday after having no congregation for 60 years, in a sign of revival for the country's Christian community

The 160-year-old Mardin Protestant Church, one of the oldest Protestant churches in the Middle East located in Artuklu, a district in the southeastern province of Mardin, has reopened following extensive restoration work.

The first religious service was held on Sunday in the church which was closed 60 years ago and had been in ruins ever since.

A few remaining members of the Protestant church's congregation attended the service. Rev. Ender Peker, the church's pastor, told Anadolu Agency (AA) that they were happy to reopen the church for religious services even though the congregation was small. Peker said that the province of Mardin has been home to Protestant Christians since the second half of the 19th century but that most of the community migrated to other cities or emigrated abroad some 60 years ago. "Due to the low number of congregation members, no pastors were assigned here and the church remained unused," said Peker, who was appointed to Mardin from the southeastern city of Diyarbakır two years ago.

"It is very touching to hold a service here years later," Peker added. The pastor said that this house of worship is among the few churches in Mardin that have not been restored by the state, adding that they decided to renovate the building by their own means since restoration work done by the state would take time. He praised the government's efforts to restore churches and the rights of minorities in Turkey over the past decade.

The church's congregation consists mainly of the Assyrian community, an ancient ethnic group concentrated in southeastern Turkey, particularly in Mardin, which is host to a diverse Christian population.

The L-shaped church was built around the same time as the Christ Church in Jerusalem, which is regarded as the oldest Protestant church in the Middle East in a region where Protestant denominations have a notably smaller group of followers compared to the more dominant denominations of Orthodox Christianity and Catholicism.

Turkey's Christian minorities in the southeast which hae been plagued with decades of terrorism and a lack of economic development had recently started to return to the region with prevalence of relative stability, long after they migrated from the region. The government also started restoration work in long-neglected churches. Currently, three Assyrian churches and monasteries in Mardin are included in a restoration plan by the government, which hopes to attract the Christian diaspora in back home.

Since the Justice and Development Party (AK Party) came to power in 2002, Turkey has sought to restore the rights of minorities as well as temples of minority faiths, from Assyrians to Jews and Greeks. Many properties have been returned to these minorities - decades after their forceful confiscation by the state, while the government also pursues a policy of restoring abandoned historical buildings.

There are 25,000 Assyrian Christians in Turkey, 18,000 of whom live in Istanbul. Mardin was once home to a sizeable Assyrian community, but most emigrated abroad.
RELATED TOPICS