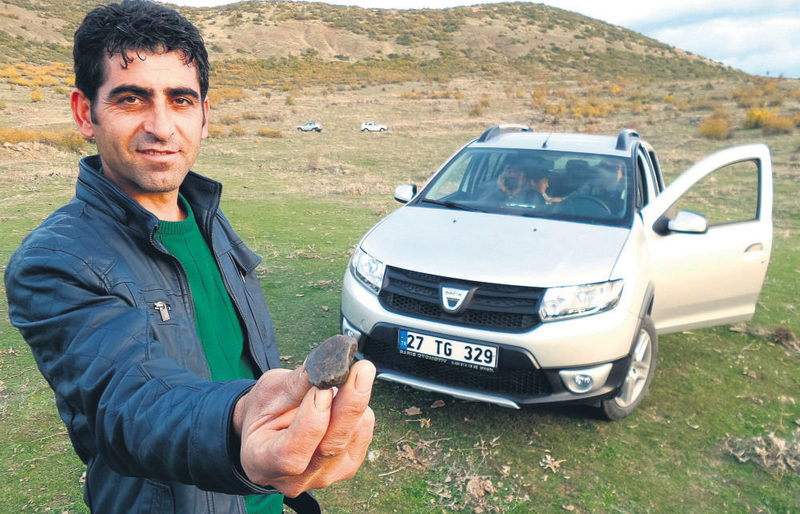 by Daily Sabah with Wires Nov 21, 2015 12:00 am
Can they tax something God sent? was a question in the minds of residents of Sarıçiçek, a village in eastern Turkey where locals have reaped profits by selling pieces of a meteorite that fell to Earth in September.

Villagers boasted of their newfound fortune while the Turkish media descended on the village in the eastern province of Bingöl after reports that the sale of fragments from the Vesta asteroid were going for up to $60 per gram. It naturally drew the attention of tax inspectors after villagers told the media they had earned more than TL 1 million ($350,00) from sales to scientists and collectors from all around the world. A team of inspectors from the local branch of state-run tax services visited the village earlier this week to the chagrin of baffled locals curious about how something "God sent from the sky" can be taxed. Rıdvan Ergin, a villager, told a news agency that inspectors told them "stones" belonged to the state and should be taxed. "We didn't extract it from underground. It is something God sent from the sky and therefore, should not be subject to taxing. We would pay taxes if it was a mineral resource, but taxes should not apply in this case," Ergin, who found a 40-gram piece of the meteorite, said.

İsmail Ergin, another villager who found a 500 gram piece that helped him to pay his debts and purchase a brand-new car. "We didn't start up a business. We are poor farmers and covered our debts by selling them," he told İhlas News Agency.

Following complaints by villagers, Finance Minister Mehmet Şimşek, who joined the debate on whether the meteorites should be taxed on social media, gave locals the good news. "Implementing income tax is out of the question as our citizens in Bingöl did not engage in a commercial activity. But if people come from other cities to collect stones for commercial purposes, they will be subject to tax," Şimşek said. "I ordered officials to examine the situation. It is obviously not something that can be taxed. Simply collecting and selling something is not sufficient to impose a tax. Since they don't have a commercial organization in place, [villagers] will be exempted from taxes," he told Anadolu Agency.
RELATED TOPICS