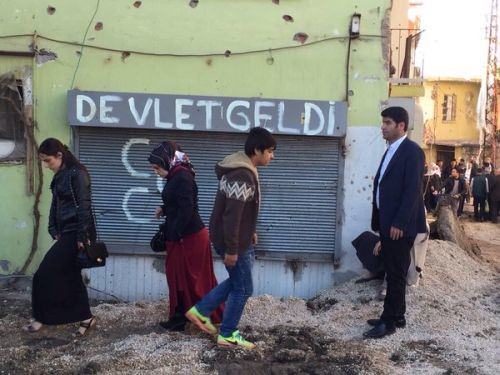 by Daily Sabah Nov 21, 2015 12:00 am
General directorate of security affairs has sent a circular letter to all of the 81 provinces' police chiefs, telling them to warn their personnel against all kinds of actions that could constitute as human rights violations and also against behaviors that "would damage the police department's reputation."

The circular letter instructed police chiefs to launch an investigation into any personnel that undertook the aforementioned actions.

The warning came after some security personnel were found to have written 'discriminative' expressions in graffiti on some of the walls of houses in Turkey's southeastern Silvan district.

The graffiti were said to have been taken note of by the operations teams at the region, which were there conducting anti-terror operations against PKK terrorists during the latest curfew which lasted from Nov. 3 to Nov. 14.

On one of the walls, it was written "Either be a Turk and be proud, or if you are not a Turk, learn to obey," whereas on another it read, "You will see the power of Turks and the Turkish State!"

Prior to this incident, an image of a body, later found out to be a 24-year-old militant from the terrorist organization PKK, was dragged behind an armored police vehicle in southeastern Şırnak province in October.

The Interior Ministry later announced that the two police officers accused of involvement in desecration of the corpse were suspended from duty.

These recent actions, which also sparked outrage on social media, prompted the general directorate of security affairs to warn security personnel to be more careful regarding such incidents. The circular letter said, "Such actions far away from professionalism, damage our reputation and impairs the trust [between security personnel and locals] which we have established with difficulty."
Last Update: Nov 21, 2015 6:30 pm
RELATED TOPICS