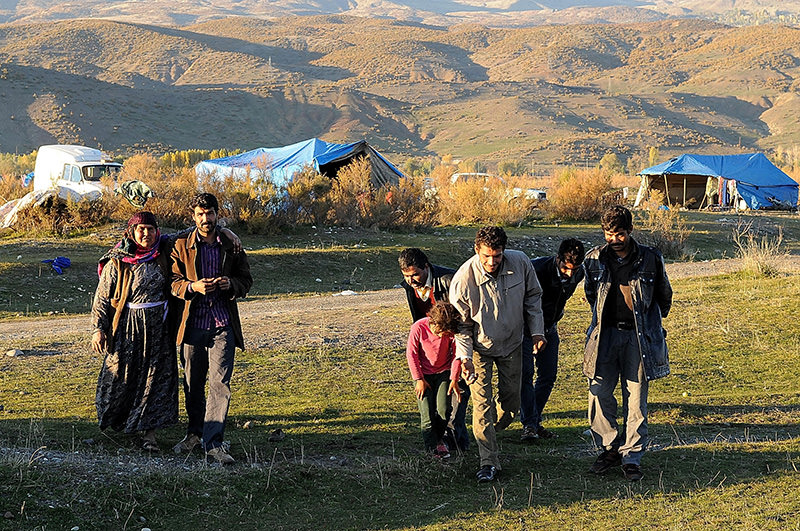 by Anadolu Agency Nov 22, 2015 12:00 am
Syrian refugees in Turkey have been joining the search for meteorite fragments in the eastern province of Bingöl, which are worth around $30 and $60 per gram.

In Sarıçiçek, a village 5 km (3 miles) east of the provincial capital Bingöl, showers of extra-terrestrial rocks has fallen on nearby land since early September.

After hearing rumors that researchers and academics were keen to collect the small meteorites, villagers have been gathering them day and night since then. The area still draws hundreds of locals and foreigners after reports that the meteorites, whether for research or collectors, cost between $20 and $60 per gram.

Around 40 families of Syrians living in Diyarbakır, Şanlıurfa and Kilis provinces, arrived in the area nearly a week ago, in hopes of finding meteorites that have fallen from the skies. Several Syrians, most living in makeshift tents, entertain the dream of making money from the stones, which they described as a "gift from God".

Abbas Mosa Hemo, from the Syrian Raqqa province, told Anadolu Agency on Sunday that he came with his family to search for the meteorites. "We have come to seek the stone God has sent as a gift," said Hemo, adding they had been able to find two meteorites despite all their efforts.

Another Syrian, Shaban Hemo, who fled the Syrian city of Aleppo and now lives in a two-room home in the southeastern province of Diyarbakir, said he had not found a single meteorite despite a three-day search. "It is said 'this stone [meteorite] is very precious, worth money, go and search them'. If I find any, I will build a house with that money when we return to Syria," Shaban Hemo said.

Muslum Sefer, another refugee from the Syrian town of Kobani that was the scene of fierce clashes between Daesh and Kurdish fighters, said he came to Bingöl four days ago to find a meteorite. "I came here with three, four friends of mine. One friend and I found one meteorite each; they offered $300 for them, but we declined, as we learnt that higher prices are offered in Istanbul," Sefer said, adding that he plans to buy a home with the income from the stones they found.

Ali Halil Hemo said his house in Syria had been decimated in clashes and he also wanted to build a new one if he made money with the meteorites. "We, as family, came to the village after learning that a precious stone fell in Bingöl; it is holy and precious as it came from the sky and everyone is striving to find this stone," Halil Hemo added.

Ozan Ünsalan, an associate professor at Istanbul University's science faculty, has created a website to gather information about the meteorites. On November 16, he told the shards found around Sarıçiçek were part of 4Vesta, one of the largest asteroids in the solar system, and were considered precious among the scientific community.

Last week, Finance Minister Mehmet Şimşek took to Twitter to ask Turkish users whether they thought the meteorites sold in Sarıçiçek were taxable. More than 28,000 Twitter users replied to the minister's questions. The majority said the income should not be taxed.
Last Update: Nov 22, 2015 5:30 pm
RELATED TOPICS