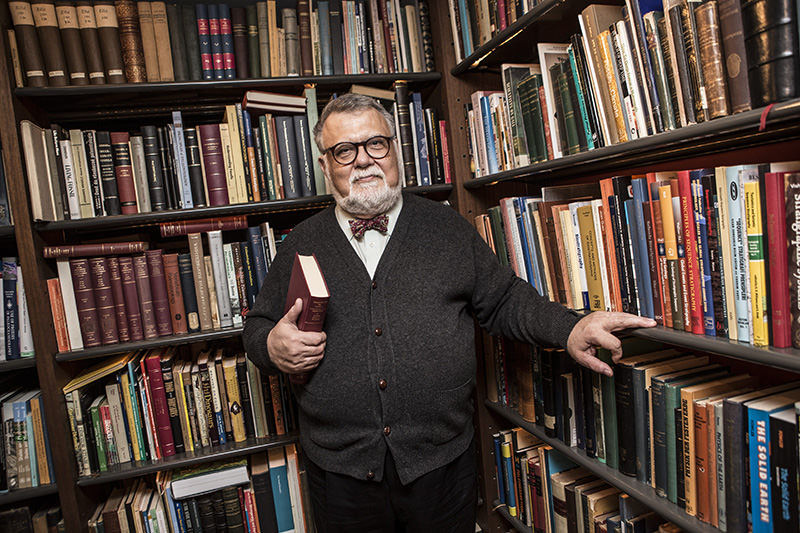 by Daily Sabah Nov 23, 2015 12:00 am
Professor Celal Şengör, a renowned Turkish geologist and faculty member of Istanbul Technical University (İTÜ), received heavy criticism for his remarks in a recent interview supporting the bloody 1980 coup and 'insignificant' torture during that period.

Şengör stated his full support to the 1980 coup and its leader General and later President Kenan Evren during the interview with Armağan Çağlayan from Radikal daily. Çağlayan reminded Şengör about the executions, torture and other unlawful practices, such as extreme punishment like making prisoners eat feces which is known to have been executed in the Diyarbakır Prison in Turkey's southeast after the coup. Şengör replied with "No, no wait a minute. To begin with, forcing someone to eat feces is not torture."

"I'd eat [feces] happily [he uses the idiom implicating 'honey' in Turkish]. Do you know why? I saw it eaten. One day, gorillas at the San Diego Zoo were offering their feces to each other. They are primates just like us. It's nice, nothing will happen." Şengör continued.

Following the release of the interview, Şengör came under heavy criticism. The municipality of Istanbul's Kadıköy district canceled one of Şengör's conferences whch was to be held in a municipality facility on November 28 and aimed to promote his last book "Aptalı Tanımak" (getting to know the idiot).

Politicians and writers from all political lines, especially deputies from the pro-Kurdish Peoples' Democratic Party (HDP), harshly criticized Şengör's words, with some wishing 'bon appetit' to him. The HDP, a coalition of the main pro-Kurdish political line with socialists and a very active party in southeastern Turkey, contains many members who once spent time in the Diyarbakır Prison. The torture and maltreatment in the prison is considered to be one of the primary reasons for the PKK terror organization easy recruitments during its establishment period.

Şengör, who earlier sent wreaths to the funerals of Evren and former general Şahinkaya, claimed that the coup was justifiable and approves all practices of the coup government, while renouncing the inter-ideological terror that marked the second half of the 1970's in Turkey. Stating that he is not against democracy for Switzerland, Şengör defined the regime in Turkey as ochlocracy (mob rule) and a rule of 'the elite' should be applied instead.

The coup, held under the pretext of ending political turmoil in the country, saw leaders of all parties imprisoned and parties banned for years. Through the decisions and practices of the National Security Council (MGK) chaired by Evren, ruled the country by suspending the constitution and through decrees until 1983, 50 people were hanged including activists from both left-wing and right-wing movements between 1980 and 1984 by the coup regime. Hundreds of thousands of people were arrested, and torture under detention was widespread as 300 people died dubiously. A large number of people went missing and were presumed dead after being tortured for their political actions by security forces. Citizenships of 14,000 people were revoked, 98,000 people were convicted of being members of unlawful organizations, 230,000 people were tried in lawsuits and 1,683,000 people were blacklisted, many of whom were fired from their public sector positions.
Last Update: Nov 23, 2015 10:26 pm
RELATED TOPICS