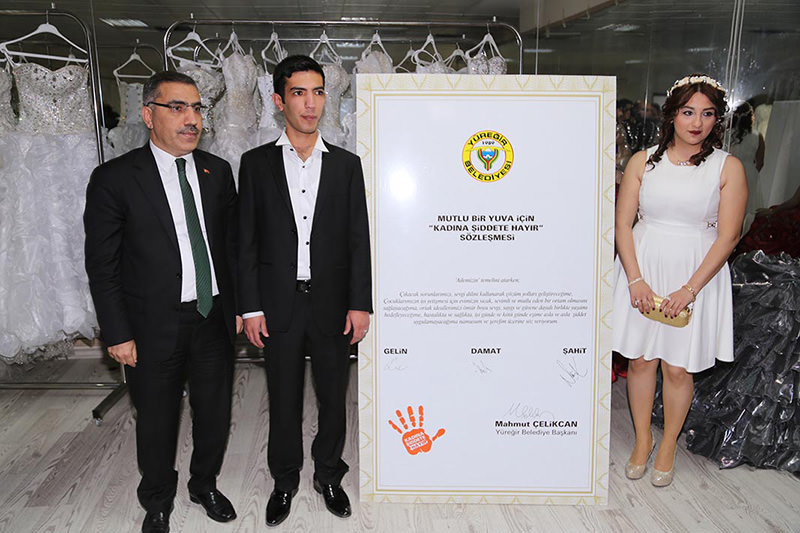 | DHA photo
by Daily Sabah Nov 25, 2015 12:00 am
Some 20 couples who got married in a mass wedding ceremony in Turkey's southern Adana province on Tuesday have signed a contract before the ceremony in which they promised their future husbands or wives that they would not abuse them physically during their married lives.

The couples in Adana's Yüreğir district combined voices to mark their stand against violence against women; marking the first time a contractual agreement is being used to potentially combat all forms of violence.

The mayor of the Yüreğir Municipality, Mahmut Çelik, said during the ceremony that "women have a special place and importance [in society]. Their education is very important."

Emphasizing the importance of raising awareness against domestic violence, the mayor said, "It is by these means that we can stop the normalization of violence against women."

The contract, on which the 20 couples put their signatures, read as follows:

"I promise on my honor that I will use the language of love to solve problems, that I will provide a homely, happy atmosphere for our children to grow up healthy, that I will establish a joint life based on eternal life, respect, trust for our ideals to persist, and that I will never, ever inflict violence on my spouse."

The prevalence of domestic violence, physical and sexual violence targeting women despite measures raises concerns in Turkey. Authorities seek to curb the disturbing trends. The government is looking into ways to implement more effective judicial measures and ways to raise awareness to the issue among the public.
Last Update: Nov 25, 2015 3:59 pm
RELATED TOPICS