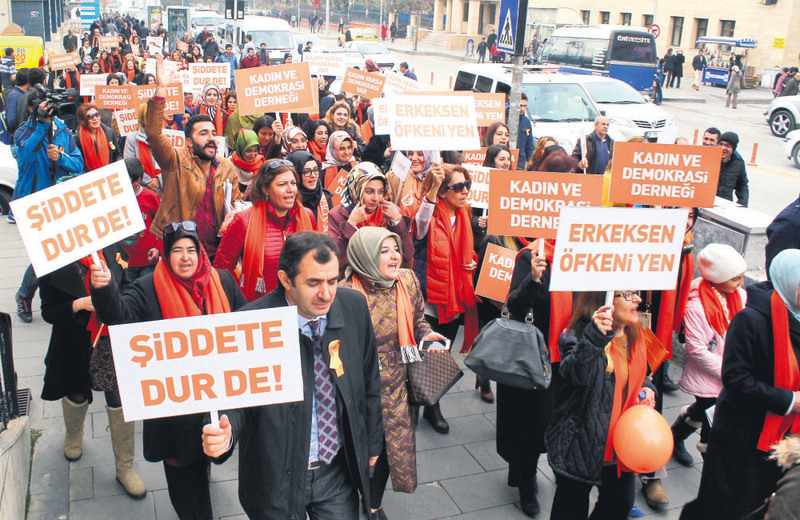 Activists in the eastern city of Erzurum staged a demonstration yesterday carrying banners reading ,Stop violence, and ,Be a man and beat your anger.,
by Daily Sabah Nov 26, 2015 12:00 am

Turkey marked the International Day of Elimination of Violence Against Women yesterday with a pledge by the government to step up measures to end the disturbing phenomenon that led to the deaths of more than 1,100 women in five years, according to a nonprofit organization

In a country where violence against women remains a hot topic due to broad media coverage of murders, which have reportedly risen in recent years, Turkey marked the International Day of Elimination of Violence Against Women yesterday.

Speaking at an event in Ankara, Family and Social Policies Minister Sema Ramazanoğlu said they were looking to progress in the struggle to end violence against women with improvements in policies on the issue.

Violence, which occasionally ends up with the killing of a women by their spouses, has claimed 1,134 lives in the last five years, according to a nonprofit organization. The number is compiled from media reports on murders while an official figure on the number of murders is not available.

Lethal domestic violence is a common occurrence in the country with victims, often women, seeking divorce. Although police protection and shelters are available for women threatened by their spouses, authorities say it is difficult to prevent murders or acts of violence simply by laws. In Turkey, a patriarchal mindset is prevalent with women viewed as staining the husband's honor, especially if they seek remarriage after a divorce.

Turkey is one of the signatory countries of the Istanbul Convention, the first comprehensive and legally binding international document on domestic violence. The convention that came into force last year, requires implementation of several steps to combat the violence. Amid the obligations the convention demands of countries is the penalizing of psychological violence towards women and female genital mutilation, and acting as an accomplice for the perpetrators of violence. The convention also orders countries to begin campaigns to raise awareness for gender equality, such as educating students on the issue. Signatory countries will also be required to implement effective laws against domestic violence, and protect the victims as well as offering them therapy.

Sema Ramazanoğlu said violence against women is a severe human rights violation and a serious social issue prevalent all across the world regardless of cultural, economic or geographical differences. "Violence is a learned phenomenon. It is sustained as a legacy of one generation to the subsequent generation as a way to resolve problems," Ramazanoğlu said.

Ramazanoğlu said that the government is about to wrap up an action plan to fight violence against women. She said the action plan would improve legal and preventive measures by the judiciary and law enforcement and further raise awareness to the issue. The plan will also provide more assistance for victims and rehabilitation for perpetrators.

Turkey set up Violence Prevention and Monitoring Centers in 39 cities to monitor the state of violence against women and to help victims. Ramazanoğlu said those centers will be available all across the country by the end of 2016.

Still, Turkey has a long way to go to wipe out the problem. A government-sponsored survey by Ankara-based Hacettepe University shows women often avoid seeking legal or any other aid for domestic violence, either viewing it as "not a serious problem," out of shame, or believing that their spouse may change.

Only one in every 10 women asks for help against violence, and more than half of them only do so when the violence reaches unbearable levels, according to the survey. The majority of women downplay the severity of violence by saying it is not a serious problem, while others believe their spouses may change their behavior in time. The cause of violence is primarily problems with the husband's family, according to the survey's results, followed by problems related to the spouse and economic difficulties, respectively. Forty-four percent of those surveyed who had been subjected to physical and sexual violence said they did not tell anyone about it. The survey, conducted annually since 2008, found the proportion of women speaking to their friends or close relatives about the violence they experienced rose to 56 percent from 51 percent. This is likely due to rising awareness of domestic violence that has seen wider media coverage in recent years. However, about six in every 10 women whose education level is barely past grade school still do not speak out about domestic violence. A small percentage of women talk to their husbands' parents about the domestic violence. The survey showed that women's reluctance can partly be attributed to a lack of assistance from others and a lack of knowledge about where to file a complaint and seek assistance. However, it is mainly due to women's own attempt to brush off the instances of violence as a familial matter, fear of retaliation by the spouse or fear of suffering economically, as most depend on their husbands' income as the sole means of living.

Violence toward women is "a pandemic of global proportions" according to United Nations Entity for Gender Equality and the Empowerment of Women (U.N. Women). One in three women have experienced physical or sexual violence, mostly by an intimate partner, according to U.N. Women.

Turkey will be a part of U.N. agency's campaign for "16 Days of Activism Against Gender-Based Violence." The campaign calls for organizing "orange" events to raise awareness to the issue. The color, symbolizing optimism and a better future for women victims of violence, will see historic and well-known buildings and structures in Turkey being lit in orange.
Last Update: Nov 26, 2015 2:06 am
RELATED TOPICS