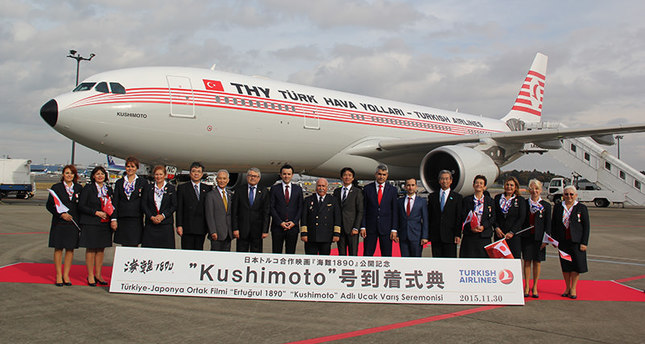 A Turkish Airlines plane named after a Japanese town where dozens of Ottoman sailors were rescued in 1890 has landed at an airport near Tokyo, one day before the premiere of a movie telling a dramatic tale of Turkish-Japanese historic friendship.

For the special flight, "Kushimoto" was replicated from a Turkish Airlines plane that rescued 215 Japanese citizens from Tehran on the orders of Turkey's then President Turgut Özal during the Iran-Iraq War in 1985.

The film Ertuğrul 1890 depicts both historic incidents of Turkish-Japanese friendship.

A statement released Monday by Turkish Airlines said that those on board the Kushimoto included "the brave cabin attendants who were onboard the original plane 30 years ago."

The flight was greeted by a welcome ceremony at Narita Airport where Junichi Numata and Teruji Takahoshi, who were rescued from Tehran, handed bouquets of Turkish bellflowers to the crew.

"Remembering that time 30 years ago, we Japanese were left behind in Tehran in a very desperate situation, with no airplane carrier willing to let us board," Numata said during the ceremony.

"Amidst Iraqi president Saddam Hussein's warnings of indiscriminate attacks in Iran's airspace, Turkey dispatched the emergency planes and came to rescue us," he added. "For us, Turkey is a lifesaver. I cannot express my gratitude enough to the Turkish people."

Turkish Airlines' vice president of sales for Asia and the Far East, Ahmet Harun Baştürk, also gave a speech in which he expressed pride in the airline's role in the wartime operation.

"The special Kushimoto plane which used the same design as the original DC-10, was named after the Kushimoto village in Wakayama prefecture, where the Turkish crew of the Ertuğrul frigate in 1890 were saved," he said.

"We're delighted to make this reunion happen between our brave staff and the Japanese people from the incident," he added. "Moving forward, we wish to continuously play an important role in maintaining such a wonderful friendship."

The movie premiering Tuesday tells the story of the rescue in Tehran, 95 years after villagers from Kushimoto saved 69 stranded sailors from the 'Ertugrul', an Ottoman frigate that sank while returning from a goodwill voyage to Japan.

More than 580 sailors lost their lives when the frigate was caught in a typhoon off the coast of Wakayama, and subsequently drifted into a reef and sank. The entire saga became a milestone in historic friendly relations between Turkey and Japan.

The plane "Kushimoto" will be used in flights between Istanbul and Japan's southern-central region of Kansai.

Share on Facebook Share on Twitter
Previous in Turkey The PKK violence that led to the death of a notable lawyer in the... Next in Turkey An Istanbul court Monday rejected an appeal by Cumhuriyet daily Editor-in-Chief...
DAILY SABAH RECOMMENDS