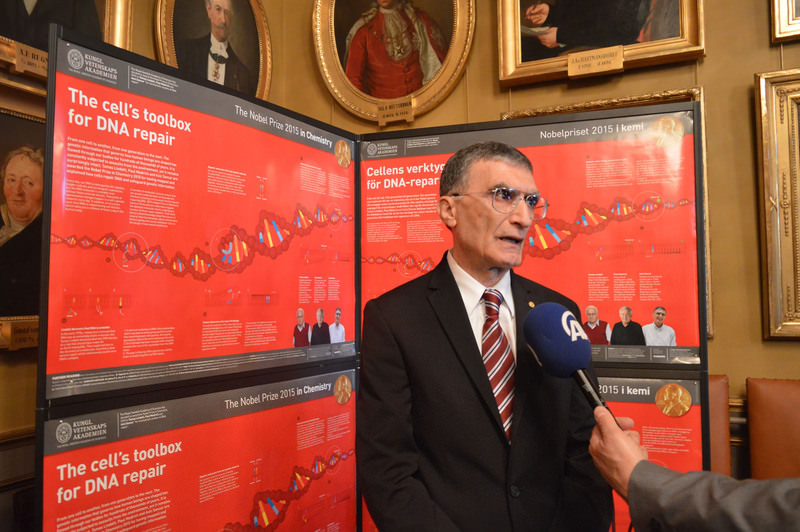 Nobel laureate in chemistry Aziz Sancar, looks on during a news conference at the Royal Swedish Academy of Science, Dec 7, 2015. (REUTERS Photo)
by Daily Sabah with AA Dec 07, 2015 12:00 am
Turkish scholar and 2015 Nobel Chemistry prize winner Aziz Sancar on Monday expressed his concerns over the recent 'political fallout' between Turkey and Russia, while condemning Russian President Vladimir Putin's "madnesses" as harmful to not only both countries but also the whole world.


Speaking after a seminar at the Royal Swedish Academy of Sciences, Sancar said: "The term of 1880's, the Tsarist term, has passed. Turkey is not a 'sick man' but Russia is," he said, referring to the phrase first used Russian Tsar Nicholas I to describe the dying days of the Ottoman Empire.

"All his madnesses are harmful for both Russia and Turkey. [I hope] the Russian people will pull thierselves together and do something about Putin."

Sancar, who won the Nobel Prize for chemistry in October this year for his work in mapping the cells that repair ultraviolet damage to DNA, also asked for Allah to "give [common] sense to Putin."

Speaking after receiving his award in the formal ceremmony, the Turkish biochemist and molecular biologist said that he was surprised by the response to his award in his native Turkey.

"I would have won this award 20 years ago if I knew that the Turkish people were delighted so much," he said. "I hope this will set an example for the Turkish youth."


His research is an important step for treating cancer. Sancar was among three scientists awarded the prize for their work on DNA repair.

Sancar was born in 1946 in Turkey's southeastern province of Mardin . After he completed his M.D. at Istanbul University and completed his Ph.D. on the photoreactivating enzyme of E. coli in 1977 at the University of Texas.

Currently a professor at the University of North Carolina, Sancar is an honorary member of the Turkish Academy of Sciences and the American Academy of Arts and Sciences.

Sancar made his remarks to an Anadolu Agency reporter in Stockholm as relations between Russia and Turkey turned sour over the shooting down of a Russian military jet on the Turkish-Syrian border on Nov. 24. The SU-24 bomber was brought down for violaitıng Turkey's airspace regulations despite repeated warnings to turn away from Turkish airspace.