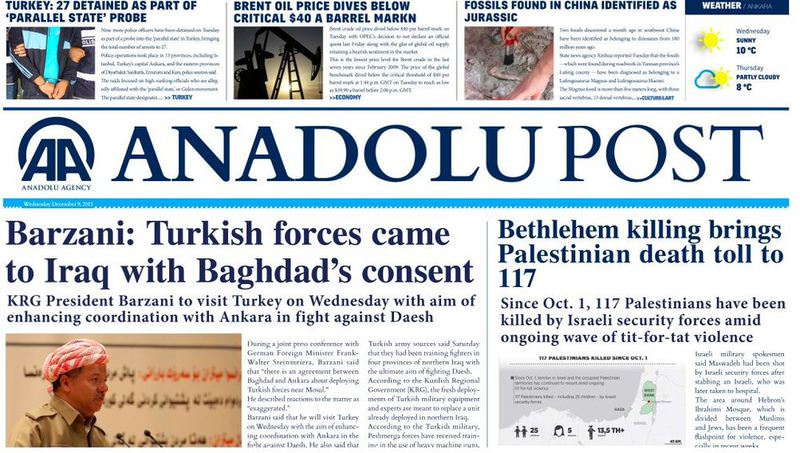 by Merve Aydoğan Dec 12, 2015 12:00 am
Amid the ongoing debates on freedom of the press in Turkey, another English-language newspaper has joined the list of media sources to dispel false claims. Turkey's Anadolu News Agency has introduced a one-page online daily newsletter named "Anadolu Post" for English readers.

Speaking to Daily Sabah, Mehmet Öztürk, Anadolu Agency's Foreign Languages News Desk chief editor, said that the newsletter aims to provide key developments about Turkey, as well as from all around the world, on a single page in English. Öztürk said "English readers abroad have difficulty finding reliable information about Turkey. Anadolu Post will fill the current void." He said that the newsletter's main objective is to provide reliable news to readers worldwide with analysis, exclusive articles, infographics and up-to-date news taken from the Anadolu Agency. Öztürk said, "The increasing number of news sources in English will also help to avoid disinformation and false claims about Turkey."

For the last 13 years, Turkey has enhanced its media sources. Based on the Turkish Statistical Institute's (TurkStat) report released in July 2015, 4,176 magazines and 2,944 newspapers were published in 2014. Various online English-language news sources are available in Turkey; however, there are currently three main English-language newspapers that are printed in Turkey and also worldwide. Daily Sabah is one of the biggest newspapers, which released its first issue on Feb. 24, 2014.
Last Update: Dec 13, 2015 4:12 pm
RELATED TOPICS