Hopes die and are rekindled for refugees across the region 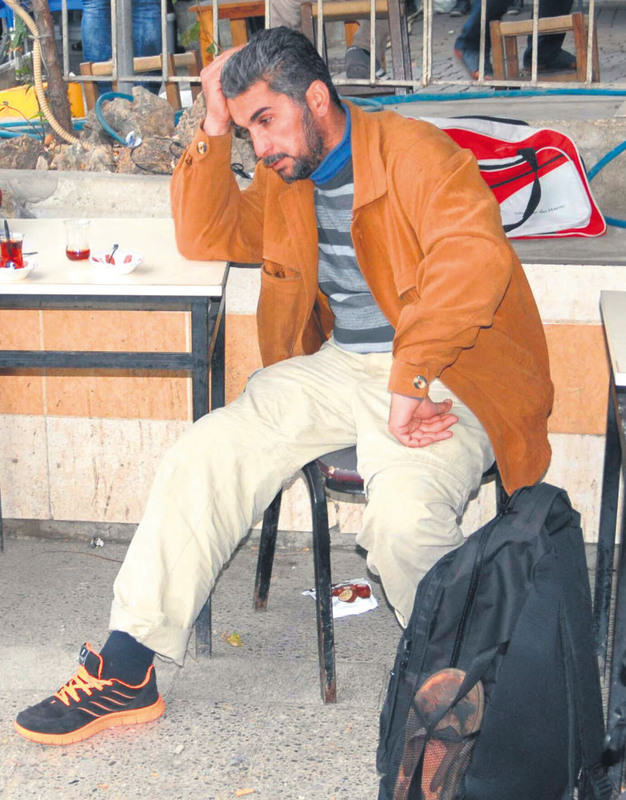 Ali Alsaho (above) lost his entire family in a sinking boat, yet every day, dozens risk their lives on dangerous journeys to Greece.
by Daily Sabah Dec 14, 2015 12:00 am

Refugees' main goal are a better life and to return home one day. For Ali Alsaho from Syria, both dreams are long gone since he lost his entire family en route to Europe, while Meysam Waziri from Iran, who started a new life in Turkey, clings to the hope of seeing his family again one day with the help of Turkish leaders

Turkey, with its unique location between two continents, is a popular destination for refugees with different fates and from different backgrounds even though they share the same goal of having a better life while keeping their hopes of one day returning to their home countries.

Stories of a Syrian who lost his entire family in a sinking migrant boat en route to Greece from Turkey and an Iranian who started a new life in eastern Turkey without his family who he has not seen for years demonstrate how their tragedies, although varying, are one and the same.

Ali Alsaho, a businessman from Syria's Deir az-Zour, was among hundreds of thousands of Syrians who had to leave their country due to a brutal conflict and the rise of militant group DAESH. He long struggled to stay in his home country despite a four-year-long conflict. Ultimately, however, he decided to pursue a risky route abroad for his seven children between the ages of 20 days old and 9 years old. He hoped to make the potentially deadly journey to the Greek islands from Turkey alive, though he was aware of the dangers that awaited, namely, strong winds, bad weather and smugglers forcing migrants to travel in dinghies. He entered Turkey from its Syrian border about one month ago with his family and headed to Çeşme, a Turkish resort town in the west awash with refugees due to its proximity to the Greek islands, the gateway of thousands of refugees to Europe. The family boarded a small boat two weeks ago with others minutes before the first problem occurred: Their engine stopped due to a glitch. Soon, severe winds started pounding their boat, violently tossing those aboard into high waves. Amid a life-and-death struggle, Alsaho managed to pluck his children one-by-one from the sea, but the boat soon capsized, and the father was separated from his children and wife in the pitch-black dark of the night. He managed to swim more than a kilometer to shore where he was noticed by fishermen who rescued him. He immediately contacted the Coast Guard, pleading for help to find his missing family.

The Coast Guard soon found the bodies of his daughters, 9-year-old Amar, 7-year-old Shahazaran and 4-year-old Sajida, along with his 2-year-old son Muhammad. His wife, 4-year-old daughter and his two infant boys are still missing. They most likely ended up dead at the bottom of the Aegean Sea, which claimed the lives of at least 684 people this year, according to the International Organization for Migration (IOM). He was hopeful in the first few days that there would be "a miracle," and they would survive, but days and worsening weather quickly dashed his hopes. He returned to İzmir, a large Turkish city close to Çeşme, and is awaiting news from officials on the fate of his family. He spends his days gazing at the sea that took his loved ones from him and does not know what to do next. "I don't want to go back to Syria. I don't want to go to Europe. I don't want to stay here," the desperate father told Doğan News Agency (DHA). "My life ended after I lost my family," he tearfully said. Even his plans on where to bury the recovered children are uncertain. "I am not sure. Maybe I will send them to my brother in Syria so he can bury them there. Or they can stay here. I will wait for my other children [to be recovered from the sea]," he said grimly.

Authorities say Syrians comprise the majority of migrants attempting to cross into Europe. Turkey is home to more than 2 million Syrians who have fled the conflict in their country. Turkey has spent more than $8 billion for their care. Though Turkey offers them shelter in state-of-the-art refugee camps, only a small fraction of Syrians stay in those camps, while others who face poverty and an uncertain future head to Europe. Refugees from Afghanistan, Pakistan, Iraq, Myanmar, Eritrea, Bangladesh, Senegal, Somalia, Iran, the Palestinian territories, Mali and Mauritania make up the remainder of refugees taking the European route.

According to figures from the Coast Guard, more than 83,000 migrants were intercepted in Turkish waters this year. The number of migrants peaked in August when the Coast Guard intercepted more than 17,000 people, but the numbers dropped slightly for a brief period with the onset of cold weather. However, the aggravated conflict in Syria has contributed to a renewed surge in the number of migrants in search of a better life in Europe. Migrants often fall victim to human smugglers who defraud them and send them off to their deaths by supplying defective boats and life vests.

Children are the most vulnerable of the migrants, according to the IOM, which says more than one-third of all deaths in the Aegean Sea this year were children. Aylan Kurdi, a 3-year-old Syrian boy, became a symbol of migrants risking their lives en route to Europe after an image of his body washed up on the Turkish coast made headlines in September. His death sparked sympathy across the globe, yet the international community, criticized for not taking more migrants and dragging its feet in resolving the conflict in Syria that started the refugee crisis, did little to ease their plight. European Union countries where migrants travel most still bicker over how many refugees each country should take while the continental body decided to fund Turkey to help migrants instead of taking them in.

Meysam Waziri is luckier than Ali Alsaho who escaped certain death in Syria, only to lose his family in the process. Still, the former Iranian football player shares the same fate after being separated from his family. The 33-year-old has not heard from his parents for about four years since he fled home for fear of persecution. Now living in the eastern city of Malatya and making a living as an elevator repairman, the dream of seeing his family again is what keeps him motivated.

Waziri was a rising player in his country and played for the Shahrdari, Saipa and Bank Mellat Tehran teams and was elected to the U-21 national team. However, his days of success came to an abrupt end when his father was accused of membership in the People's Mujahidin of Iran, an opposition movement at odds with the Iranian regime whose members are often jailed. He was excluded from the national team and faced pressure for years by the Iranian regime. Fearing imprisonment, Waziri took shelter in Turkey with his wife and 4-year-old daughter some four years ago. His asylum request was accepted, and he settled in Malatya where he took a job as a repairman. He said he leads "a happy life" except for his separation from his father and mother, who he has not seen since he came to Turkey."I missed them so much, but I can't see them because I can't go back to Iran. To Iranian authorities, I am a criminal. They will either lock me up or execute me," he told Anadolu Agency (AA). Waziri could not contact his family either by phone or Internet, and does not know what happened to them. "I want Turkey, President Recep Tayyip Erdoğan, to help me. My only wish is to see my family again," Waziri said.
RELATED TOPICS