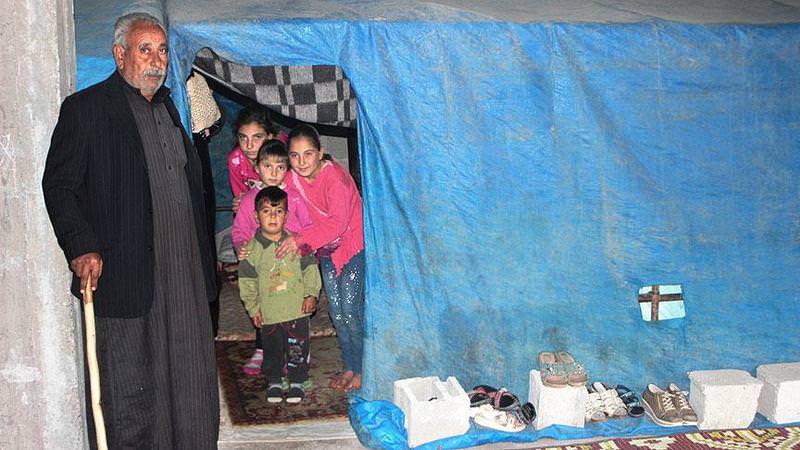 Turkey marked the beginning of the new year with celebrations while millions of Syrians, who took shelter in the country, hope 2016 will see the end of a conflict that broke them away from their homeland to which they long to return

Turkey welcomed 2016 with nationwide celebrations. Yet it was a less joyous occasion for the millions of Syrians living in the country after being displaced by an almost five-year brutal conflict.

The most common sentiment among the more than 2.4 million Syrians living in Turkey is certainly an end to the war in their country though it worsened with Russia's involvement in the conflict and the rise of Daesh in northern Syria. But hope is all they have after leaving everything back home and braving arduous journeys to reach Syria's neighboring countries.

Musa al-Ahmad, a father of five, who took shelter in Turkey with his family, lives in a tent camp in Akçakale, a Turkish town on the border with Syria. He is among the 28,000 other refugees living in the camp. Al-Ahmad is grateful for Turkey's hospitality and likes the country which shares deeply-rooted ties with Syria, aonce ruled by the Ottoman Empire. But "there is no place like home" he says, hoping to return one day.

Al-Ahmad fled to Turkey in 2012 from Deir az-Zor, a hotbed of conflict between rebels and the Syrian regime. His journey took him to a village near Akçakale but lack of job prospects took him to another town in the south. He worked as a fruit picker for years before settling in the tent camp over a year ago to protect his family from the harsh winter they faced in a makeshift tent. "I made many Turkish friends here and my children learned Turkish. Turkey is my second home but it is not like our real home. We all hope the war will end in 2016 and we will go back to our old lives," al-Ahmad told Ihlas News Agency. Even if the war ends, it will likely take years, maybe decades, to rebuild Syria whose many cities were devastated by clashes and airstrikes. Al-Ahmad is not pessimistic. "It is in ruins now but we can heal our wounds together and rebuild it," he says.

Muhammad Salim lives in a makeshift tent in Osmaniye, a southern Turkish city near the Syrian border and home to 25,000 Syrians in a tent camp and in the city. He is among the poor Syrians who do not want to live in tent camps and decided to live either in tents they set up themselves or in abandoned buildings. The new year is little more than a change of date for Salim, his wife and their seven children, as they struggle to make ends meet working odd jobs. "It is hard to be away from my country. I hope peace will return to Syria, and hence us too. It seems difficult for now," he says.

Um Kholsom Ahmed resides in a single-room house with her three children in Osmaniye. "I feel like at home in Turkey and the people here, our neighbors, charities help us. Still, I long for Syria," she says.

For Syrian children, New Year's meant new gifts as charities delivered toys and clothes to Syrian children across the country. In İzmir, a western city popular among Syrians especially those looking to reach the nearby Greek islands, charities delivered the gifts to impoverished Syrian children. Elsewhere in İzmir, Syrian migrants were spotted waiting for dinghies to take them to Greece on the other side of the Aegean Sea on New Year's Eve and New Year's Day. Their expectation from 2016 is having a new home in Europe where they are promised a better life if they are accepted. Indeed, hope is among the few things keeping them alive and thriving on. Almost every week, scores of migrants heading to the Greek islands in dinghies drown when their boat sink, either due to bad weather, faulty boats or overcrowding. According to the latest official figures, more than 700 people died trying to travel to Greek islands from Turkey's western coast, while more than 800,000 people made it alive to Greece, the closest gateway to Europe for thousands of refugees with little prospect of a better life in Turkey.

As Syrians marked the new year in a bittersweet mood, Turkey spent New Year's Eve on the streets. Street parties were held across the country though bad weather overshadowed celebrations.

Istanbul welcomed the new year amid snowstorms that left the city covered under a thick white blanket for the first time on a New Year's Eve in years. Few people attended celebrations on İstiklal Avenue, which used to be filled with revellers in the past years. A pop music concert in the Etiler district attracted a bigger crowd who counted down to the new year amid a spectacular display of fireworks.

Nearly 15,000 policemen were deployed across the city to prevent cases of violence and sexual harassment of revellers, which have been a common occurrence in celebrations, particularly on İstiklal Avenue, in the past years. An Azerbaijani man was detained for harassing an Ukrainian woman on the avenue during the celebrations.

In capital Ankara, celebrations concentrated at Güvenpark and Kızılay Square. Following the capture of two would-be suicide bombers earlier this week, police were on alert against potential attacks at crowded locations. Every reveller was searched at police checkpoints around Güvenpark.

Antalya, a popular summer resort, welcomed the new year in relatively cold weather, but a group of swimmers who celebrate New Year's Day every year by swimming in cold waters flocked to Konyaaltı Beach to swim their way into 2016 in a temperature of 1 degrees Celsius.

In the southeastern city of Diyarbakır, which was vibrant with celebrations in past years, people opted to stay at home as the city grapples with the terror of the PKK, whose militants have been clashing with security forces for days. Gunshots rang throughout Thursday night in Sur, a historical district of the city where a curfew was imposed. Police officers from the Turkish National Police's Special Operations units were deployed in almost every corner of the district and spent the first hours of 2016 on the streets, vigilant against potential attacks by the terrorist organization, which occasionally fire at security forces or carry out bombings in the city.
Last Update: Jan 01, 2016 1:41 pm
RELATED TOPICS