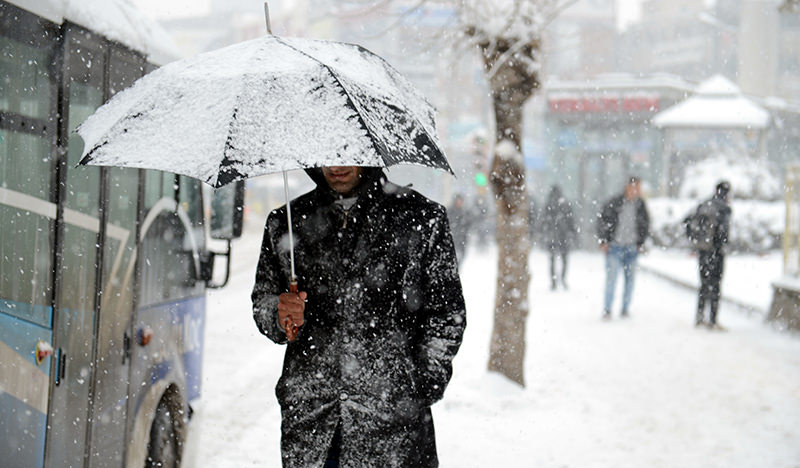 | AA Photo
by Anadolu Agency Jan 01, 2016 12:00 am
A cold snap and snowfall have hit the eastern part of Turkey, disrupting daily life in most of the provinces.

According to the Turkish Meteorology Directorate, the lowest temperature has been measured in the eastern Ardahan province at -14C on Thursday night. Friday's temperature in the province hit -11C while it is expected to be -23C on Sunday.

Other eastern provinces such as Erzurum, Kars, Ağrı, Erzincan and Iğdır have experienced temperatures of -11C, -10C, -8C, -4C, -3C and -4C respectively on Friday.

Meanwhile, up to 41 cm of snow have accumulated in the city center of the province of Ağrı, 32 cm in Erzurum and 7 cm in Iğdır.

Some parts of eastern Hakkari province were hit with one meter of snow.

"It was not snowing that much in the recent years here," Taner Oner, a Yüksekova district resident, told Anadolu Agency. "It has snowed a lot this year. I have been trying to take my vehicle out from under the snowbank for hours."

Because of the snowfall, roads of 1,338 neighborhoods in Van, Mus, Bitlis and Hakkari provinces have been closed.

Dozens of vehicles also have been stranded on the southeastern Diyarbakır-Bingöl highway due to icy conditions.

The cold spell and snowfall in both the east and north of the country are expected to last until the next week.