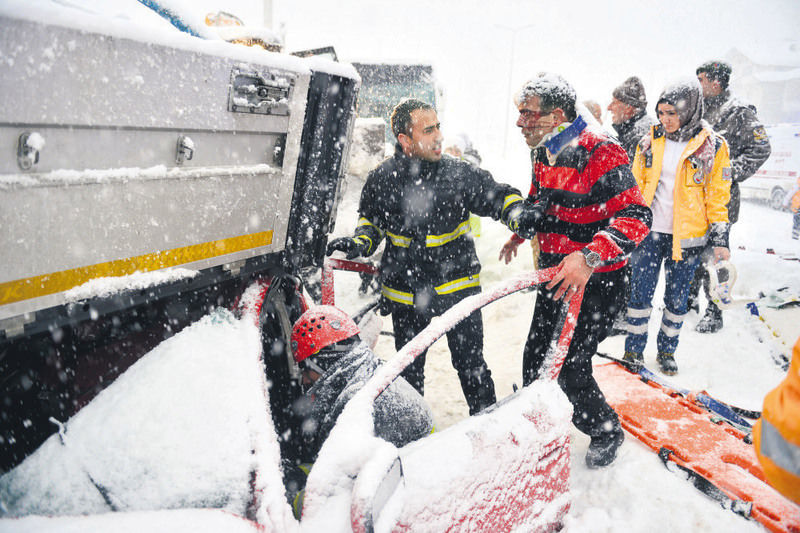 Temperatures that had plummeted well below freezing in much of the country for the past several days are expected to return to seasonal averages this week, with snow replaced by rain in the west

The heavy snowfall and freezing temperatures affecting much of the country for the past several days are expected to turn into heavy rain this coming week. According to meteorological officials, a new temperate front approaching the country from the Mediterranean region will push temperatures up starting today and replace the heavy snow with rain.

Tomorrow, much of the country, with the exception of the east, will see heavy rain and temperatures climbing to seasonal averages after last week's drop.

Bolu, in northwest Anatolia, saw temperatures plummeting to minus 30.4 degrees Celsius over the weekend, becoming the coldest province in the country. Bolu Meteorology Department Manager Fazlı Büyük said he expected temperatures to rise considerably by tomorrow.

Temperatures in Istanbul are expected to remain above freezing for the rest of the week, while Ankara will be fluctuating around zero degrees.

Bosporus closed due to smog

The Istanbul Port Authority announced on Saturday that the Bosporus Strait was closed in both directions to shipping traffic as of 12.58 p.m. due to heavy smog. As physical conditions did not prevail for a safe passage through the strait, Port Authority said that they temporarily halted shipping traffic from and to the Black Sea.

The bad weather brought a string of problems, especially for motorists, while it was most welcomed by children who have been spending the last couple of days building snowmen and having snowball fights as schools were closed.

Meanwhile, in Sakarya's Karasu region in the northwest of the country, 19 people were injured in seven separate road collisions caused by ice over the weekend.
RELATED TOPICS