3 armored ambulances to be sent to southeast this week, health minister Müezzinoğlu says 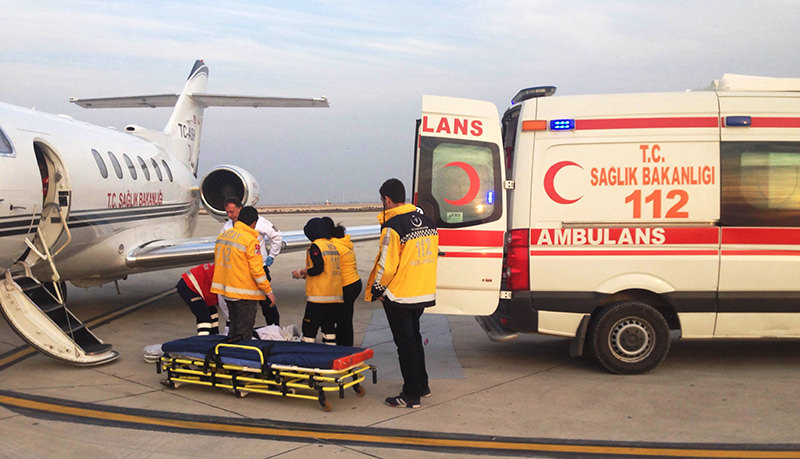 Health ministry also uses helicopters and flights to reach patients who are located in remote areas (Sabah Photo)
by Daily Sabah with AA Jan 05, 2016 12:00 am
Turkey's health minister on Tuesday has slammed recent PKK attacks in the country's southeast saying: "No one fires on health staff even in a warzone," while he announced that three armored ambulances will be sent to Turkey's southeast next week.

Mehmet Müezzinoğlu was speaking on Tuesday at Anadolu Agency's Editors' Desk in Ankara.

Müezzinoğlu also accused the PKK of attacking hospitals and ambulances with rockets and petrol bombs.

All necessary measures would be taken to secure the health system in the region, Müezzinoğlu said, adding that three armored ambulances would be delivered to Diyarbakır, Şırnak and Mardin this week.

He also said hoax call-outs were hurting the ability of the health services to respond to genuine emergencies.

The health minister said that in spite of every difficulty and the PKK's terror activities medical services would continue to work for all citizens.

In southeastern Turkey - especially the heavily populated provinces of Diyarbakır and Mardin--heavy clashes between security forces and the PKK have been the typical scene since the PKK renewed their offensive against Turkey last summer.

Several districts of these provinces are occasionally put under curfew, with troops and police conducting anti-terror sweeps to weed out militants holed up in residential areas. Terrorists sometimes target ambulances, especially those sent for security personnel who have been injured in gunfire. The PKK also poses a threat to the doctors, nurses and paramedics who are treating wounded soldiers and police officers in local hospitals.

An ambulance driver was recently shot as he drove to the scene of an incident in Diyarbakır. Another health worker was gunned down while he returned home from work adding to a staggering number of casualties since July, when the PKK started its violent campaign.

The PKK-considered a terrorist organization by Turkey, the U.S. and EU-resumed its three-decade armed campaign against the Turkish state in late July.

A total of 296 PKK members have been killed in counter-terrorism operations in southeastern Turkey since Dec. 15, according to the Turkish General Staff on Tuesday.