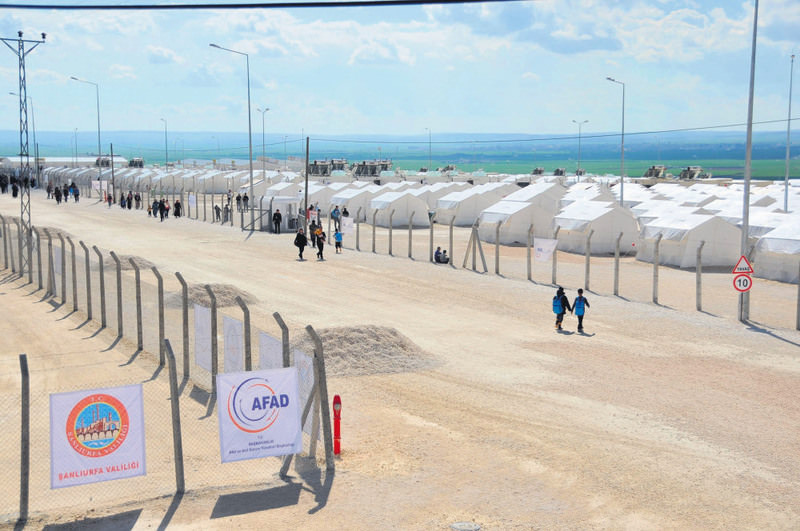 A view of the refugee camp in Suruu00e7, which is the largest in Turkey for Syrians whose number in the country have surpassed 2.4 million. (AA Photo)
by Daily Sabah with DHA Jan 05, 2016 12:00 am

The construction of a hospital is underway at the biggest refugee camp for displaced Syrians in Turkey, which struggles to take care of the more than 2.4 million Syrians that have fled the conflict in their country

The biggest recipient of the displaced from its southern neighbor Syria, Turkey, in line with its open-door policy for its "brothers and sisters" - as Ankara officials termed it - has announced the construction of a fully equipped hospital in Suruç, home to the largest refugee camp.

The prefabricated hospital being constructed in the "temporary accommodation facility" - the name given to refugee camps by Disaster and Emergency Management Authority (AFAD) running the places - will address the health needs of some 26,000 refugees.

The camp in Suruç, a Turkish town on the border with northern Syria, has a capacity of 40,000 people and is among the internationally renowned, state-of-the-art camps dotting the country's lengthy border with Syria. The hospital in the camp will replace primitive tents serving residents. The facility, built on 750 square meters, will have clinics including a children's health clinic, a dentistry clinic, an emergency room and internal medicine clinic along with a laboratory for tests. Its construction is expected to end in less than two months. Mehmet Han Özdemir, the director of the camp that was built a year ago, said although they had medical staff, the lack of a proper medical facility challenged them. "This place is like a small town after all and you have to build what every town has here. The government attaches importance to health services for our guests," he said, using the official name used for describing refugees with a temporary status.

Özdemir said the camp is composed of 15 neighborhoods with 3,500 people living in each neighborhood and some 200 babies were born in the camp within one year. "In addition to welcoming newborns here, we also have people die here. So, we have to address all the needs of these people. The hospital will just do that," he said.

Turkey hosts more than 266,000 Syrians in 25 refugee camps in its southern cities, along with 1,814 Iraqis. Refugee camps were built following an uprising in Syria in 2010 that evolved into an all-out conflict, worsened with the emergence of DAESH, which also displaced Iraqi citizens after it took over northern Iraqi towns. Refugee camps, including "container cities" made of housing units converted from shipping containers, house clinics, schools, lifelong learning classes, mosques, grocery stores and recreational facilities and the hospital in the Suruç camp will likely be the first of its kind for offering comprehensive services to residents. AFAD received a public service award by the United Nations last year for its Sheltering Center Management System to streamline the administrative work of running refugee camps to better serve their residents.

On the other hand, the majority of Syrians in Turkey either stay in houses they have rented or bought and impoverished ones are forced to live in dire conditions. Turkey has spent some $7.6 billion on refugees, but according to AFAD and Ankara the international community has not provided enough to help Turkey to shoulder the burden as the largest refugee hosting country, along with Lebanon and Jordan, which have taken in their share of refugees from Syria.

Meanwhile, Syrians hoping for a better life in Europe are increasingly heading to Europe via Turkey. According to the latest figures, the Coast Guard has intercepted more than 91,000 migrants off the country's Aegean and Mediterranean coasts as they were heading to the Greek islands throughout last year. It is six times higher than the number of people detected and stopped by the Coast Guard in 2014. The Coast Guard figures reported by the Turkish media show 279 people died en route to Greek islands when their boats sank in 2015.
RELATED TOPICS