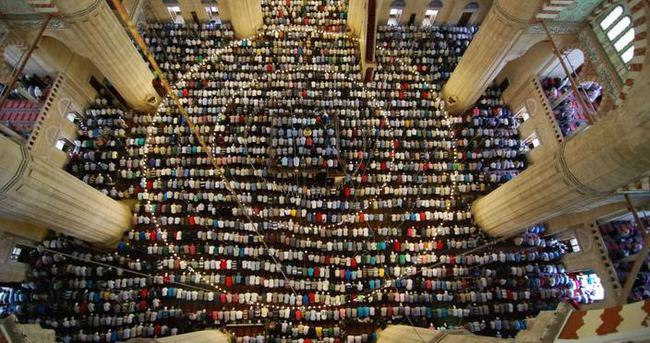 by Anadolu Agency Jan 08, 2016 12:00 am
Working practices are often a source of strife between management and workers but a new Turkish government move on Friday breaks is set to affect around three million public servants across the country.

"We have prepared a draft circular letter to arrange working hours on Friday so as not to hamper freedom of worship," Prime Minister Ahmet Davutoğlu said on Tuesday in a meeting in the Turkish parliament.

He said the arrangement would mean no disruption to full-time work and would help build stronger brotherhood in the country.

The regulation, expected to come into effect in the following weeks, will apply to over three million civil servants.

One of them is a high-school teacher who complains that the current one-hour noon break is "definitely not enough".

Halit Altındağ, 42, who lives in the central Konya province, says he has to "have lunch, go to the nearest mosque, do the ablutions [a must for Islamic prayer], perform the Friday prayers and relax -- all in an hour".

"Sometimes we have to attend afternoon classes without having lunch if we prioritize the prayers," he says.

"It is a bit more difficult for the teachers," Altındağ admits, when comparing himself to other civil servants.

"Their managers might be tolerant when they are a bit late, but if a teacher is late, it means tens of students are wasting their time."

He suggests that the Friday noon break "should be no less than one and a half hours".

Stating that he also worked in Istanbul for 12 years, he says he worked with some headmasters and colleagues which were not tolerant about colleagues carrying out their religious duties.

"It should not be under the initiative of your chiefs or managers. There should be a legal regulation," he says.

Veysel Atasagun, 55, an officer in one of Istanbul's courts, agrees with Altındag saying Friday breaks should be made longer -- "One and a half hours at least," -- he suggests.

He is usually late back to work on Fridays: "I am lucky that my managers are tolerant of my being a bit late following the Friday prayer. However, a number people in this country have had to work at prayer times."

He says he would prefer Fridays and Saturdays off instead of Saturdays and Sundays.

"We live in a Muslim country; we have yearly feasts Eid al-Fitr and Eid al-Adha and Fridays are our weekly festivals, [times] when I feel great spiritual joy."

Friday was the official weekend holiday under a law introduced on Jan. 2, 1924, just before the abolition of the Caliphate the same year.

Before that, there was no defined weekend for officials living in the Ottoman Empire. The overall tendency was to have a day off on Fridays for Muslims, on Saturday for Jews and on Sunday for Christians -- holy days for each religion.

However, only 11 years after Friday was officially recognized as the weekend, it was changed to Sunday with a new act on national holidays. The new law, introduced on May 27, 1935, was only one of the reforms made as part of the secularization process of the new Turkey.

Starting in the early 1920s -- after the Ottoman Empire collapsed and Turkey was declared a republic -- numerous social, political and economic reforms were passed with the aim of transforming Turkey into a modern country.

Although the new law was intended to develop the trade relations with Western countries, not everybody was happy.

Those who supported the reforms by Mustafa Kemal Atatürk, the leader of new Turkey, welcomed the Sunday weekend but many others were uneasy, fearing it would be an impediment to Friday praying.

However, for the teacher Altındag, "working on Fridays is not an obstacle."

"Islam does not tell us to take a holiday on Fridays," he says, recalling the verses in the Quran, in the part of Surah Al-Jum'uah:

"O you who have believed, when [the adhan] is called for the prayer on the day of Jum'uah [Friday], then proceed to the remembrance of Allah and leave trade. That is better for you, if you only knew.

"And when the prayer has been concluded, disperse within the land and seek from the bounty of Allah, and remember Allah often that you may succeed." (Saheeh International translation)

Altındag says the Friday observance is "only coming together and praying and greeting each other at noon time, a kind of socializing with your brothers as in the weddings".

Today, Friday is an official holiday in certain Muslim countries including Iran, Algeria, Qatar and Afghanistan.

Turkey, with over 95 percent of the population being registered as Muslim, has had Sundays as the official weekend for 80 years. For public institutions, Saturday has been also part of the weekend since May 30, 1974.

Now, with the new regulation, civil servants will have enough time to carry out their religious duties at noon even if they are not off on Fridays.

Both men and women -- although religiously only men are required to do the communal Friday praying -- would break at noon before the prayer time and would restart their shift afterwards.

The new regulation will not set a fixed break time period across Turkey because of the praying time differences in every province.