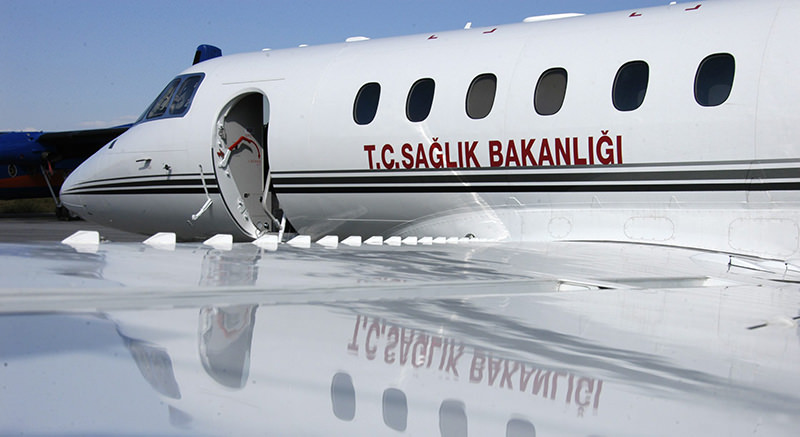 Air ambulance belonging to Turkey's Ministry of Health (Sabah Photo)
by daily sabah Jan 11, 2016 12:00 am
Turkish health officials on Sunday sent medical teams in response to a request by Nakhchivan Autonomous Republic, where a 55-year old woman in critical condition needed urgent medical assistance and was transferred to Turkey with an extracorporeal membrane oxygenation (ECMO) machine. The move adds to the range of improvements in providing urgent health services in remote areas, which are now accessed with helicopter ambulances, armored ambulances and many other vehicles able to defy unfavorable weather and geographic conditions.

Sevil Talibova, the wife of Nakhchivan's parliamentary speaker Vasıf Talibova, was hospitalized for a flu infection, but as her condition worsened, authorities contacted Turkey's health ministry to seek help.

Ankara responded positively to Nakchivan's request and sent Dr. Rüçhan Akar from Ankara University to the landlocked exclave of Azerbaijan.

Talibova became the first patient outside of Turkey to be put on an ECMO machine and successfully transferred to the country.

The transfer has reportedly been conducted in cooperation with Ankara University, the ministry of foreign affairs, health ministry and private actors, under the control of president of health ministry's emergency services Dr. Selçuk Gedik.

Turkey has a total of 17 helicopters and three air-ambulances designated for the purpose of providing health services in remote areas.

Turkish officials have dispatched armored ambulances to southeastern Turkey, where months of violence by the PKK terrorist organization has disrupted daily life.

The Turkish Cooperation and Coordination Agency (TİKA), Turkish Red Cross and Turkey's Disaster and Emergency Management Authority (AFAD) are agencies which also provide medical assistance outside of the country's boundaries at times of crises and disasters. For instance, over 48 Palestinians injured in Israel's brutal offensive in August 2014 were transferred to Turkey in cooperation with the aforementioned agencies and Turkish ministries to receive medical treatment.