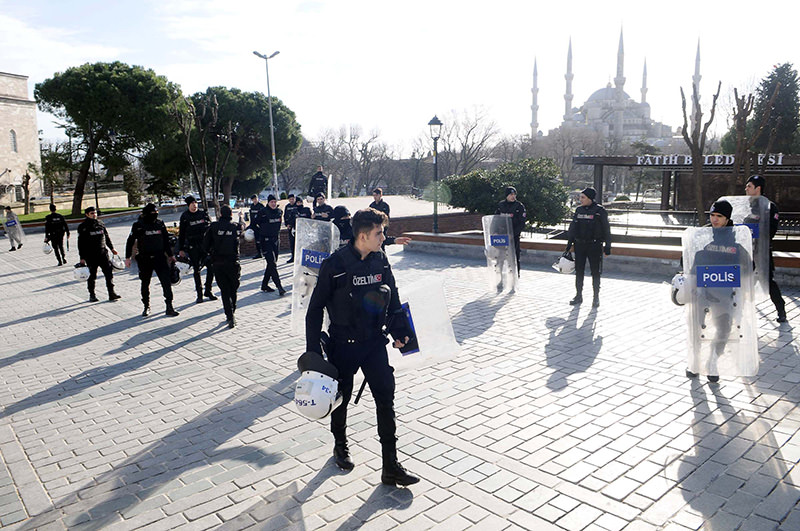 | DHA photo
by daily sabah Jan 12, 2016 12:00 am
An explosion occurred in Istanbul's Sultanahmet Square early on Tuesday, in which the city's governorate released a statement, saying that 10 were killed and 15 injured in the blast, while Deputy Prime Minister Numan Kurtulmuş said in a live TV press conference that the blast was done by a male Syrian suicide bomber born in 1988.

Later in the day, Prime Minister Ahmet Davutoğlu held a live press conference, during which he said the assailant was a member of the Daesh terror organization.

Davutoğlu said that everyone killed in the blast were foreign nationals, while Turkish citizens were among the wounded.

"Until Daesh positions are eliminated from our border, Turkey will continue its anti-terror struggle," the prime minister said, adding that Syrian nationals living in Turkey should not be blamed for the attack.

Deputy PM Kurtulmuş spoke of the incident in an earlier press conferencewith Interior Minister Efkan Ala and Health Minister Mehmet Müezzinoğlu, after a security meeting was held at the chairmanship of Prime Minister Ahmet Davutoğlu at Çankaya Palace in the Turkish capital Ankara.

Kurtulmuş told reporters that two of the injured were in critical condition.

"The blast is an extension of proxy wars that have been going on in Syria for the last 5 years," he said, while asking all countries to stand beside Turkey in the fight against terrorism.

"Terrorists do not discriminate in their attacks, they kill civilians, men, women, the elderly and the youth. Terrorism does not have any religion, language or sect. Terrorists are enemies of humanity and we would like to see everyone on our side to confront the attacks against humanity," he said.

"The civil war in Syria entered into a new phase with support of third parties seeking to boost their influence as regional and global powers, to numerous terrorist organizations. It is more brutal and merciless now. We have no doubt that the attack might be a reflection of the proxy war in Syria," he said, without singling out any countries.

In a separate live conference later on in the day, Kurtulmuş said that the assailant was believed to be a new comer to Turkey from Syria, and was not among those already being followed by police.

The Istanbul Governorate released a statement early in the morning just after the explosion, saying that the reason of the blast, type of the explosive, and perpetrator(s) were being investigated.

Later on, the governorate said that six German nationals, one Norwegian citizen and a Peruvian national were among the injured, which was confirmed by the Peru's foreign ministry. The ministry said that one Peruvian killed, and one wounded in the bombing.

A statement also came from Berlin regarding the attack, as Chancellor Angela Merkel and her Foreign Minister Frank-Walter Steinmeier said that German citizens are "probably" among the 10 killed in the blast.

Sources in the Turkish Prime Minister's office also reportedly confirmed this, saying nine of those killed in the blast were German citizens.

Davutoğlu has also touched upon this issue during Monday's live conference, saying he "would like to address our friend and ally Germany, and the pain of those killed is in hearts of 78 million [Turkish citizens]."

The explosion took place near the Sultanahmet Tram station and Dikilitaş, the Obelisk of Theodosius, at around 10:20 a.m. local time.

Local reports said the explosion could be heard from several neighborhoods of the city.

Many ambulances and police units were dispatched to the scene of the explosion early in the morning, while the injured were transferred to local hospitals.

Bomb squad teams were also at the scene as police sealed off the area.

A temporary broadcast ban has been imposed regarding the blast as investigations by police were on going, Turkey's state-run Anadolu Agency (AA) reported.

Ömer Çelik, the spokesman for the ruling AK Party issued a statement condemning what he called "a heinous attack."

Meanwhile, Ambassador of the United States to Turkey, John Bass released a Twitter message on his account, saying he was closely following the reports of the explosion.


Ambassador Bass: Closely following reports of an explosion in #Sultanahmet. Our thoughts are with those affected…


More than 30 people were killed in a Daesh suicide attack in the town of Suruç, near Turkey's border with Syria, in July.

Two suicide bombs in October outside Ankara's main train station as people gathered for a peace rally killed more than 100 people. It was Turkey's deadliest attack. The prosecutor's office said the attack was carried out by a local Daesh cell.

The Sultanahmet district is home to the Hagia Sophia museum and Istanbul's iconic Blue Mosque, one of the most popular tourist attractions in Turkey.